Chelsea went eight points clear at the top of the Premier League after a victory over Hull on Sunday, whereas Arsenal moved up to the second-place, thanks to their dramatic late win over Burnley. Elsewhere, Liverpool went down 3-2 to Swansea City at Anfield whereas Manchester United scraped a draw against Stoke thanks to Wayne Rooney’s record-breaking 250th goal for the club in injury time and the Manchester City threw away a two-goal lead to draw 2-2 with Tottenham.

Meanwhile, Everton and West Bromwich Albion strengthened their position in the top 10 with wins over Crystal Palace and Sunderland respectively whereas West Ham United broke into the top-half of the table with a 3-1 triumph over Middlesbrough. Southampton thrashed title holders Leicester City 3-0 while Bournemouth and Watford played out an entertaining two-all draw.

In what was another action-packed week of football, we take a look at who makes the cut to our Team of the Week for game week 22:

The Stoke City goalkeeper was excellent on Saturday against Manchester United, keeping a plethora of shots out throughout the course of the game. When he looked all set for a clean sheet, his goal was breached by a magnificent Wayne Rooney free-kick, but other than that, Grant was brilliant for the Potters. 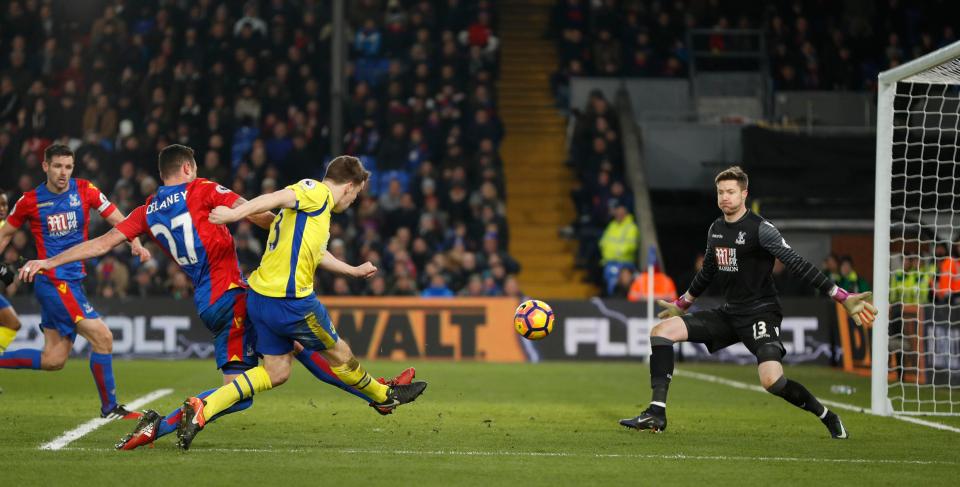 The Everton right-back is no doubt one of the finest in the Premier League and he displayed his class against Crystal Palace this weekend with another fine performance, capping it with the dramatic winner for the Toffees in the 87th minute.

What an addition the German has been to the Arsenal backline. Another typically solid performance from Mustafi against Burnley and he went on to open the scoring for the Gunners when they seemed to be struggling to find a breakthrough.

The Chelsea centre-half had another memorable outing against Hull City on Sunday evening. Having emerged unfazed from the head-clash with Ryan Mason that saw the midfielder taken off with a severe injury to the head, Cahill was in inspired form for the Blues defending like a rock. He made sure the game was in the bag for his team with a late goal.

Another great display from the West Brom defender in their 2-0 win over strugglers Sunderland. Brunt played his part very well defensively, contributing towards the clean sheet and made a difference in attack, scoring the Baggies’ second with a thumping volley.