Swansea City return to Championship action on Saturday when they host Jose Gomes’s Reading at the Liberty Stadium.

The Swans have made a fine start to the season by winning five of their first eight matches in the Championship. However, they were dumped out of the Carabao Cup on Tuesday by Watford, who won the tie 2-1 at Vicarage Road. So, Steve Cooper will be expecting a response at the weekend in front of the home crowd.

Reading, on the other hand, head into this contest off the back of a defeat to Wolves in the Carabao Cup.

Jake Bidwell is set to serve his second game of a three-match ban following an unsuccessful appeal over the red card he was shown against Bristol City at Ashton Gate. Aldo Kalulu remains sidelined with an ankle problem for Swansea.

Woodman is the club’s number one now and would be in goal for the game on Saturday.

Roberts put in a strong performance against Watford in the Carabao Cup, reminding Cooper of his abilities. He looks set to be re-included in the Swansea side for the visit of Reading.

A leader at the back, Van der Hoorn will have to be at his best to keep the Reading forwards at bay.

With Bidwell suspended, Naughton is expected to deputise at left-back against Reading.

Fulton is a solid central midfielder who has done very well for the Swans so far this season. He is expected to keep his place in the team.

Grimes is a busy player and he will need to keep things tight in midfield. A tidy passer of the ball, he should partner Fulton in the engine room.

Ayew can be devastating on his day with his speed and dribbling skills. He is expected to start on the right against Reading.

Byers could be handed an advanced role through the middle at the weekend. He will look to help the Welsh side bounce back to winning ways.

Celina wasn’t involved in the League Cup defeat to Watford, so he’ll be fresh to face Reading at the Liberty Stadium.

With Borja Baston having not scored in any of his last three matches, Surridge could be handed a start in the league. The Bournemouth loanee scored in the 2-1 defeat at Watford in League Cup and will be chomping to start against Reading. 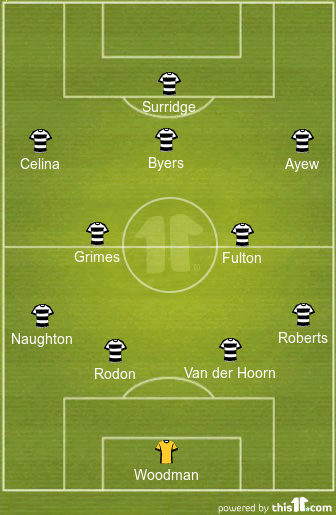