Brendan Rodgers’ Leicester City will travel to Griffin Park on Saturday, hoping to beat Brentford in the fourth round of FA Cup.

The Foxes eased to a 2-0 victory over Wigan Athletic in the last round of FA Cup earlier this month. Their form in the Premier League has wavered of late but Rodgers’ side will go into this contest on the back of a morale-boosting 4-1 victory against West Ham on Wednesday.

Brentford, meanwhile, are on a roll right now in the Championship and will look to upset Leicester City at the weekend.

Leicester City have suffered a huge injury blow, with both Jamie Vardy and Nampalys Mendy going off injured during their clash with West Ham. Vardy, however, remains touch and go for the FA Cup game.

Danny Ward is Leicester’s second-choice goalkeeper and could be handed a start against Brentford.

Justin has done very well in the limited games he has played this term. He will be handed a start ahead of Ricardo at right-back.

Morgan is behind Evans and Soyuncu in the pecking order but he is expected to start in central defence on Saturday.

Partnering Morgan will be Evans, who has had a solid season with the Foxes so far.

At left-back, Rodgers could opt to rest Chilwell and hand Fuchs a start against Brentford. The Austrian has proved to be a reliable player for the club over the years and will be raring to make a mark.

One of Leicester’s most important players this season, Ndidi will look to control the game by breaking the play and recycling possession on Saturday.

Albrighton hasn’t played much this season, however, he could be handed a start against the Championship side at the weekend.

Praet is a creative midfielder who’ll be key in opening up the Brentford defence. He’ll start in central midfield.

Hamza is a talented player who can operate in different positions across the midfield. But on Saturday, he could play a bit further than his usual position.

Gray was an unused substitute in the 4-1 thrashing of West Ham on Wednesday. But the Englishman is likely to get a run-out against the Bees in the FA Cup.

Barnes has blown hot and cold this season but he’ll be heading into this game confidently after scoring against West Ham. He should lead Leicester’s attack at Griffin Park. 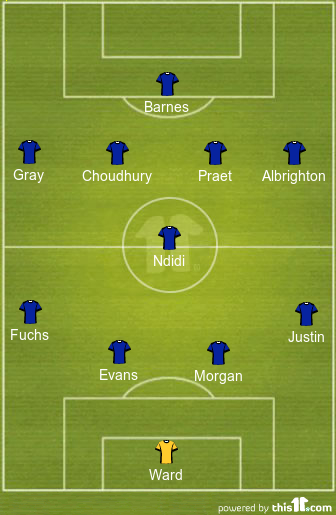