Watford Opinion – Why the Hornets should keep Roberto Pereyra

According to a report in Scottish Sun, Spanish giants Atletico Madrid are targeting a possible move for Watford winger Roberto Pereyra.

Diego Simeone’s men, who just sold star man Antoine Griezmann to Barcelona, are looking to enhance the front line of their team ahead of the start of the new season.

Pereyra, who arrived at Watford in 2016 from Juventus for a fee around £10.4m, has been one of the key players for the Hornets since, scoring/creating important goals time and time again. 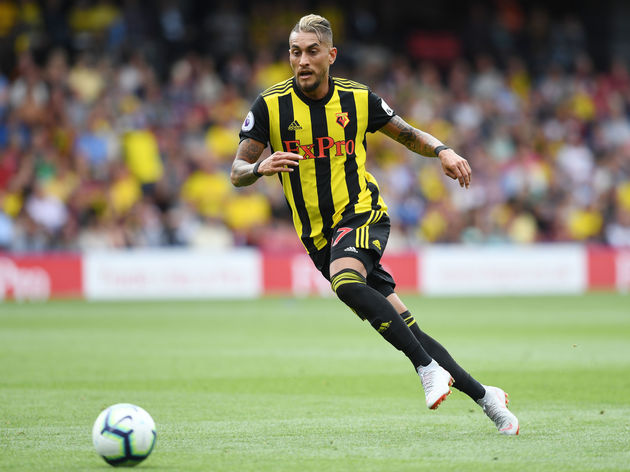 The Argentina international has scored 13 goals and supplied 5 assists in 78 Premier League appearances, which is a decent return for a wide player in a team that are underdogs in most games in this division.

Below, we analyse the 28-year-old’s attributes and figure out how he is so important to Watford. It, in turn, will justify the opinion that the Hornets shouldn’t sell him this summer:

Pereyra is one of the key components of Gracia’s system

We all know about Watford manager Javi Gracia’s uncomplicated direct football in a 4-2-2-2 formation with two strikers, two holding midfielders, two floating wingers who become wide midfielders at times and a conventional back four.

Out of these roles, the floating winger is key to this team and it is one of the hardest roles to perform as well. He needs to constantly be aware of the situation as to when the team needs width and when it requires him to squeeze centrally and help the midfielders.

Roberto Pereyra plays in of those positions and performs the role given to him in a fairly consistent manner. He is clever with the ball, knows how to create chances, is defensively aware and can take defenders on to open up space in the final third.

Hence, the Argentine is probably one of the most important players in this Watford team going into the new season. For that reason, they cannot afford to sell him this summer.

All in all, Javi Gracia’s men shouldn’t entertain any offers coming from Atletico Madrid to prize Roberto Pereyra away. He is a crucial player in their team and losing him would hurt Gracia in a big way.