Jose Mourinho goes into his first game as Tottenham manager against West Ham at the London Stadium on Saturday.

The former Chelsea and Manchester United boss’ appointment comes one day after Mauricio Pochettino was fired from his post at Tottenham. Pochettino, who guided Tottenham to the Champions League final last season, was without a win in his last five Premier League games.

With Spurs 14th in the table, Daniel Levy decided to axe the Argentinean and replace him with Mourinho, who will aim to have a bright start to his new managerial chapter at the weekend.

Hugo Lloris is ruled out until the New Year after suffering an elbow injury against Brighton. Erik Lamela and Jan Vertonghen are out with thigh injury but there are chances of the former attaining fitness before Saturday’s game.

Gazzaniga has done well since replacing the injured Lloris in goal. He’ll keep his place in the team.

Aurier has cost Tottenham a lot of points this season but he could be called back into the starting XI by Mourinho on Saturday.

Alderweireld has been a mainstay for Tottenham this season and will be looking to improve under Mourinho.

The Colombian has been in and out of the team this season, which has hampered his development a bit. However, with Vertonghen injured, Sanchez is likely to partner Alderweireld at the back against West Ham.

Rose has been very poor throughout the season but with Mourinho at the helm now, the England international’s fortunes could be revived at the club.

Ndombele is a gifted player who will look to dictate the tempo of the game from the first minute at the London Stadium.

Partnering Ndombele could be Winks, whose industry and eye for a pass will be needed against the Hammers.

Son hasn’t been at his devastating best but still been one of Tottenham’s bright spots in an otherwise disappointing campaign so far. He’ll start the game on the right flank.

Eriksen has been subpar so far this season but his vision and incisive passing could be key to unlocking the West Ham backline.

Alli needs to find consistency in his game after a series of disjointed performances this term. However, the Englishman could start on the left flank on Saturday.

With 6 goals in 11 league games, Kane is likely to lead the Spurs attack against West Ham. 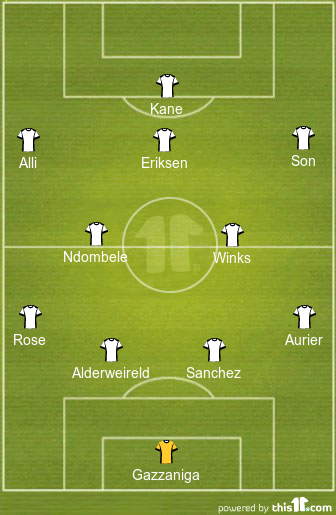