Newcastle are coming into this fixture on the back of a comfortable 2-0 victory over bottom club Huddersfield Town. The Magpies’ task was made easier for him when the Terriers right-back Tom Smitch got himself a straight red card in the 20th minute of the encounter.

They now welcome Sean Dyche’s Burnley to St.James’ Park to try and hand the Clarets their first defeat of the new year. This will not be an easy task though as Burnley are coming into this fixture on the back of an inspired showing in their 2-1 win over Tottenham last time out.

Jonjo Shelvey’s long-term knock is set to keep him out of this fixture as well despite his return to the action being quite close. Kenedy appeared as a substitute against the Terriers and could be in line to find a spot on the bench yet again.

Goalkeeper Rob Elliott has to undergo a surgery on his back to permanently solve a recurring problem while Ciaran Clark picked up a knock that could see him miss this crucial fixture as well.

The Slovakian keeper has helped Rafa’s men keep many points that they would’ve lost hadn’t it been for his effective and timely involvements.

The American international has been a potent attacking threat for the Magpies and will retain his place in the right wing-back role.

The Swiss centre-half has gradually made the right-sided central defensive role his own at St.James’ Park.

The Newcastle skipper has been getting rave reviews, thanks to his performances. A sure starter.

The 27-year-old Frenchman joined the Magpies in 2017 but has only recently come to the fore.

The injury to Paul Dummett has forced the usually dependable Matt Ritchie a little further back than his usual role as a winger.

The Spaniard is one of Newcastle’s biggest creative outlets and his movement and running will be important against Burnley.

The youngster is a graduate of the famous Arsenal youth academy and this is certainly visible in the finesse he displays on the ball.

A product of the Newcastle academy, Longstaff is assured to be one of their secret prides given his excellent displays this campaign.

The new signing was given a start against Huddersfield last time and certainly did impress. He is expected to start ahead of Christian Atsu.

The West Brom loanee is certainly their most direct route to the goal and against a team that’s unbeaten in the league in 2019, his presence in the box will be key. 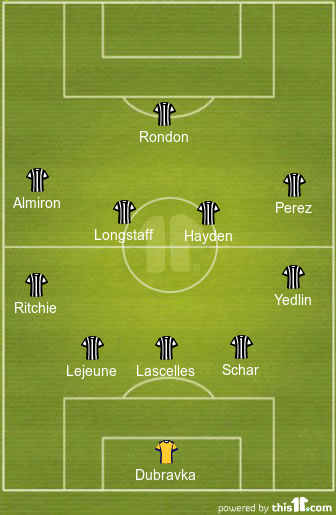