Arsenal were held to a 1-1 draw away from home at Brighton and Hove Albion in the Premier League on Boxing Day.

The Gunners started the game on a bright note and stamped their authority with their territorial domination. The visitors did not have to wait long to draw first blood and were gifted an opener by some sloppy defending from Leon Balogun just 7 minutes into the game.

The Nigerian failed to clear the ball out from the back and Alexandre Lacazette showed some impressive close control to tee up Pierre-Emerick Aubameyang who beat Matt Ryan with an exquisite finish. 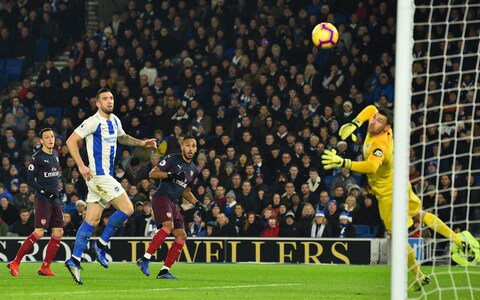 Brighton to struggled to make an impact as the Gunners maintained their stranglehold over the proceedings with some free-flowing football. Chris Hughton’s side found themselves way too exposed at the back as Aubameyang got in behind the backline, outpacing the likes of Lewis Dunk and Balogun on numerous occasions.

The former Borussia Dortmund man latched on to an accurate long ball from Laurent Koscielny but his effort was kept out by Matt Ryan. He once again found himself in acres of space, getting on the end of Lucas Torreira’s lobbed pass but the Gabonese international failed to capitalise.

The Seagulls found a reply much against the run of play through a counter-attack from an Arsenal corner. Stephan Lichtsteiner miscued his headed clearance straight into the path of Jurgen Locadia and the Dutchman outpaced Matteo Guendouzi to fire the ball past an advancing Bernd Leno.

The home side showed more intent in the second half and Davy Propper had a good chance to put his team in the lead, but put his effort wide of the post. Brighton absorbed the pressure very well and tried to hit Arsenal on the counter. Jurgen Locadia missed a chance to put the Seagulls in the lead midway through the second half.

Read More:- This 6ft tall Frenchman would be a brilliant fit for Arsenal and Unai Emery must get him in January

Arsenal tried to throw caution to the winds towards the fag end of the game but the home side held on for a draw. While Chris Hughton will see the result as a point well earned, Arsenal would look back on those missed chances in the first half and feel that they might have got more out of this fixture.

Here’s how the Arsenal fans reacted to the 1-1 draw:

The joy of Emery is really starting to fade away. We are so boring and painful to watch, and Emery benches Ozil and Ramsey who are the only players who consistently create goal scoring chances. I hate this. @Arsenal #ARSBHA

#ARSBHA
THIS IS UNFAIR. LACAZETTE THESE DAYS DOESNT EVEN PLAY 90 MINS. LET LACAZETTE PLAY 90 MINS. AT LEAST YOU COULD HAVE SUBBED AUBA SINCE HE SCORED. EMERY STOP GAMBLING WITH THE SQUAD OR YOU’LL GOOOOOO JUST LIKE MOURINHO DID. NKTT.WE ARE FED UP OF THESE NARROW WINS ANS DRAWS

#ARSBHA
Emery is gambling with the squad. We needed Lacazette in the forward for the winning goal and instead he is subbing him and bringing someone who has no interest in playing for Arsenal. I DONT WANT LACAZETTE BENCHED ANY MORE NKTTTTTTT

Imagine how Lacazette feels getting hooked when Arsenal need a goal for a player who won’t even be there in a few months. Awful. #ARSBHA

What a shit match #ARSBHA