Liverpool travel to Wolves on Thursday, hoping to extend the unbeaten record in the Premier League this season.

The Reds defeated Manchester United 2-0 at Anfield on Sunday to move 16 points clear at the Premier League summit. Goals from Virgil van Dijk and Mohamed Salah helped Jurgen Klopp’s side continue their onslaught towards the Premier League title.

Their opponents, Wolves, are sixth in the table and will enter the contest on the back of a thrilling 3-2 victory over Southampton.

The Brazilian shot-stopper has been terrific in the Premier League and will be hoping to continue his excellent form.

Currently one of the best full-backs around, Alexander-Arnold is already the league’s leading assist-provider among defenders, with 9 to his name.

Following Matip and Lovren’s injury, Gomez has stepped into the team and made the position his own with some solid displays at the back. He’ll partner Van Dijk at the back.

A leader and a commanding presence at the back, Van Dijk will have to be at his best to keep Raul Jimenez and co. at bay.

Robertson is a crucial player for the Reds and rarely lets his team down. He’ll retain his place at left-back.

Klopp could freshen up things in the midfield by bringing in the fully fit Fabinho in place of Henderson. Fabinho has been a calming presence in the midfield and would look to make his return with a top show against Wolves.

Chamberlain is a player who brings spark and flair to Liverpool’s midfield. The England international should keep his place in the team.

At Molineux, Klopp could start Lallana, who would offer Liverpool the creativity that they need in the middle of the park to carve open the Wolves defence.

The Egyptian sealed the deal against Man United by making it 2-0 in the dying minutes on Sunday. He is a certainty to start at Wolves.

One of the best players in the Premier League, Mane can single-handedly win games for his side. The Senegalese should start on the left flank.

The Brazilian makes the Reds attack tick and is dangerous in the box. He’ll be eager to get on the score sheet on Thursday. 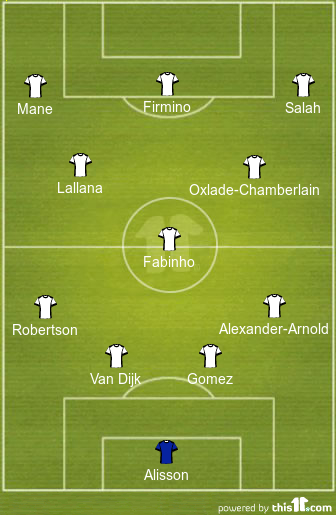