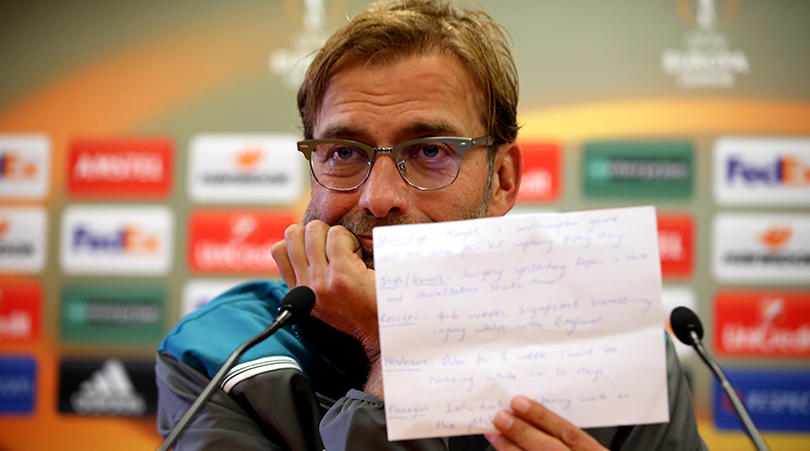 There has been a flurry of activity so far during the January transfer window, but one club that has been noticeably quiet so far this month has been Liverpool. Despite the fact that the current Premier League leaders have been battling some injury issues to key players, Jurgen Klopp’s men have thus far not made many headlines when it comes to transfer business.

Lazar Markovic may be allowed to leave six months prior to the conclusion of his contract, while Ben Woodburn is reportedly of interest to Hull City. Otherwise, there has not been so much as a ripple in the transfer market from the Reds.

When asked about his club’s lack of activity, Klopp told the BBC, “People tell you here’s a player, there’s a player, go buy them. But you cannot because after three weeks you have another problem because the other boys come back. For a few of them, maybe they’re just out for Leicester.”

As it stands, Liverpool are the odds-on favorites to take home the Premier League title for the first time ever. Just about every legit gambling site (read about which sites are reputable at GamblingSites.com) on the web has Liverpool, not Manchester City, as the smart-money favorites to win the league. Klopp’s decision-making has plenty to do with that, of course.

Rather than making a signing for a player that may come in and provide injury cover for just one or two games, Klopp believes in having his team set at the beginning of every season. Emergency signings may be needed if there is a long-term injury crisis, but Klopp is clearly of the belief that his side is healthy enough to survive some of the short-term blips that have popped up so far.

Klopp is also reluctant to replace a player on a full-time basis due to injury. If that player earned his playing time prior to going down injured, he should not lose his job just because he got hurt. That point is particularly hard to argue considering Klopp currently has his side sitting pretty at the top of the English top flight. The players currently missing from the lineup have earned their regular places in the squad, and they helped the team get to where they are now. So, why should they be replaced by a new signing?

Trent Alexander-Arnold and Joe Gomez have earned their starting spots in the Liverpool defense. Klopp believes that any new signing that would come in and shuffle Klopp’s depth chart and rotation would not be fair to the players that helped the team get to where they are now.

The manager added, “Only in football. In all other parts of life, if you replace everybody who is ill or had a broken leg and would be out for four weeks the world would be an ugly place. In football it’s like that because it’s only a game – but we take it very serious.”

The injuries to Alexander-Arnold and Gomez will test Liverpool’s defensive depth, to be sure. Klopp has already had to resort to playing a couple of midfielders, James Milner and Fabinho, out of position in order to provide some injury cover. Milner and Fabinho have looked passable enough in their differing roles, but obviously Klopp would prefer to have his everyday defenders healthy and available for selection.

Klopp’s mantra is also likely a big reason for Liverpool’s success so far this season. Having happy players and players that like playing with one another is a big part of what makes a team successful. So far, Liverpool have done just about everything right this term.

Klopp said, “‘It’s only a game come on buy a new one bring him in!’ Then afterwards if we buy a fullback we then ask Trent and Joe, so now do you want to play? That makes no sense, so we have to just go through this and this transfer window will not be ours.”

Liverpool did plenty of their transfer business last summer, anyway. In addition to the splashy big money signings of Fabinho and Alisson Becker, the Reds also welcomed midfielder Naby Keita over from German side RB Leipzig. Perhaps the most unheralded signing of last summer as the addition of speedy winger Xherdan Shaqiri, who has looked right at home in his first season under Klopp since making the switch from the recently-relegated Stoke City.

Liverpool will let the clubs below them shake things up in the transfer window. We have already seen a flurry of activity from the likes of Chelsea and Arsenal, but in the meantime the Reds will just bide their time and try to win their first domestic title since 1990 with the players they already have in the fold.