Hull City will be aiming to keep their unbeaten run going when they face Swansea City at the KC Stadium this Saturday in the Championship. The Tigers, who got the better of Brentford 2-0 last week, are now slowly taking forward steps in the table. They are currently 17th in the standings, five points clear of the relegation zone now.

They are up against a Swansea team who have won their previous two games and are back in the contention for a top-six finish. Hence, it won’t be easy for Nigel Adkins’ men despite being the home side.

Jordy de Wijs is suffering from a thigh injury and is expected to be out for this game. Eric Lichaj and Reece Burke are closing in on a return and undergo a late fitness test to see whether they can take part or not. Evandro is still out while Angus Macdonald is out until March.

The keeper has been vital to the team this season, making saves which count for points. He is a guaranteed starter.

Kane has done a pretty decent job after being switched to right-back. He is expected to continue there this weekend.

The loanee from Aston Villa has been a star at the back for the Tigers. The manager would be hoping he continues to take charge of the defence.

Started a Championship game after a long time last week and looked secured. With de Wijs and Burke expected to be out, Mazuch should keep his place.

The left-back has been out due to injury but played well last week. He is expected to start this week.

The left wing is where Grosicki is at his best. He is an ever-present danger to the defenders.

Batty has been in decent form in the central midfield. Hull City are controlling games because he is doing well.

The captain has also been in an improved run of form that has helped the team in a massive way.

Bowen has been one of the dangerous attacking players the Tigers have at their disposal. He is a guaranteed starter for them.

The Aussie works hard on and off the ball for the team. He needs to bring more quality to his play while linking up the midfield and the attack.

Read More: 1.4 interceptions, 6.7 clearances – It is imperative for Hull City to retain this 31-year-old to survive in the Championship

He scored a brace last week and looks like he is in top form at the moment. Swansea defenders will have to be wary of him. 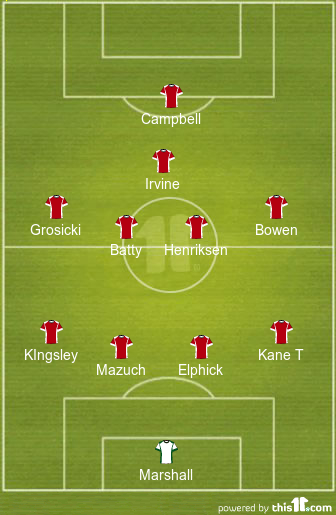