Predicted Sheffield Wednesday line-up to face Preston in the Championship

Sheffield Wednesday will be eager to get back to winning ways when they face a resurgent Preston North End in the Championship this Saturday at the Hillsborough stadium. The Owls suffered a 2-1 loss at Swansea City last week, pushing them back to 18th place in the table, still five points clear of the relegation zone. However, Jos Luhukay’s men must start winning games in the festive period.

They are up against a Preston side who have won their previous two league games and are in resurgent form. The Lilywhites are now 15th in the table and looking upwards rather than downwards. Hence, it won’t be easy for Wednesday, though their home form has been half-decent in the past month or so.

This will be Barry Bannan’s last game of suspension. Fernando Forestieri, Gary Hooper and Kieran Lee will be back from their respective injuries in January. Almen Abdi is back in training for the Owls.

Dawson’s saves have been vital to the team at times. The Wednesday fans would still be remembering his heroic penalty stop in the derby a few weeks ago.

The captain looks a better defender when playing in a back-three. He has to lift his team up though, ahead of an important game.

The experience of Pudil would be key to the team ahead of a busy festive period where games will come thick and fast.

The youngster has been doing well as a wide centre-back. His flexibility can be used to good effect when the system switch is required.

The Owls fans would be hoping for more quality from him in the opposite half. His work rate is high and he is a dangerous attacking outlet.

With Bannan out for one more game, Onomah is expected to keep his place in the midfield.

The Dutchman has been in good form in the last few weeks, which is good news for the team. His performance in the midfield could be key against Preston.

He needs to be more agile in certain situations, especially when defending one on one against the winger. Apart from that, Fox is a viable attacking outlet.

The quality of Reach in the final third is always a positive thing for the Owls. They would be hoping that the player returns to his best form though.

He has been an in-form attacker in the past few weeks. His pace and power on the counter is a threat to the opposition defenders.

He worked very hard last week but was left frustrated with very little chances coming his way. Wednesday must make use of the striker in a better way this week. 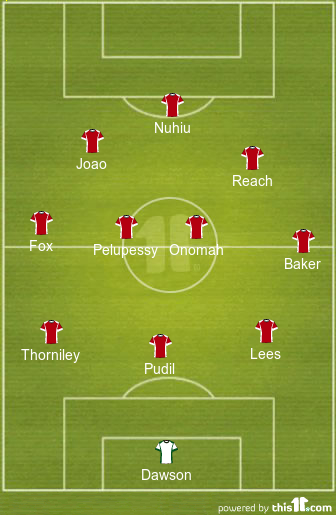