West Brom will be aiming to make a good start to life after Darren Moore when they face Swansea City at the Hawthorns on Wednesday night. The Baggies were held to a 1-1 draw by bottom-club Ipswich Town, which led to the sacking of the manager.

Now, with the hiring process still on the way, the Premier League hopefuls must be looking to return to winning ways after a three-game drought.

They will be up against a Swansea team who have struggled for consistency in the league, but have a massive FA Cup tie against Manchester City to look forward to at the weekend.

There are no such injury concerns for the Baggies going into this game. Tosin Adarabioyo was forced off at the weekend but it didn’t look like a serious injury.

He is West Brom’s first-choice keeper and should continue to be in goal.

He had a late fitness test to pass to be available for the Ipswich game, but the Everton loanee couldn’t succeed in it. Expect him to start on Wednesday.

He is the Baggies’ first-choice centre-back and that should continue to be the case.

The Egyptian was left out of the previous game, which didn’t make much sense. Expect him to be back in the team on Wednesday.

He was confused about the role given to him in the previous game. With Gibbs expected not to be risked, we could see the summer signing in a more orthodox left-back position.

The veteran was left out of the Ipswich game, however, his experience would be required in the midfield for the final few games.

He wasn’t at his best at the weekend and the West Brom fans would be hoping for more, starting from the Swansea game.

Scored in the previous game and did alright in the midfield. He should get a nod ahead of Rekeem Harper on Wednesday.

He would be better off playing as a right-winger, being a threat to the opposition defence.

He played in a different position against Ipswich and didn’t acclimatise to that. Expect the former Southampton man to lead the line on Wednesday.

Gayle’s best position is up front, but he is not bad when it comes to operating on the left wing. With Jacob Murphy not doing well there against Ipswich, the former should start in this position against Swansea. 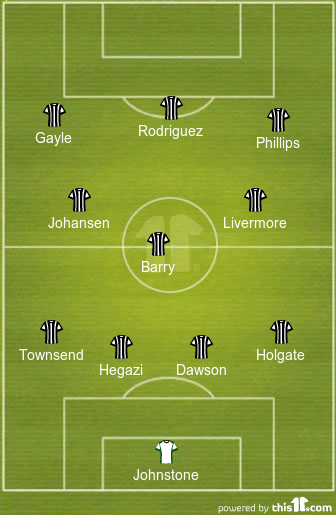