Rangers lock horns with Motherwell at the Ibrox on Sunday, hoping to bounce back to winning ways in the Scottish Premiership.

The Gers’ four-game winning run in the league came to an end at the weekend when they were held to a 1-1 draw by Hearts. Steven Gerrard’s boys also drew 1-1 with FC Porto in the Europa League on Thursday.

However, Gerrard will expect his team to get all three points against Motherwell, who are third in the Premiership standings.

Jordan Jones has been out of action with a knee injury since the middle of September and is expected to miss out again. Andy King missed the trip to Porto with a small muscle problem and is likely to be out for the Motherwell game as well.

McGregor was fantastic against Porto in the Europa League and should be in goal for Sunday’s game as well.

Tavernier has blown hot and cold this season; yet, he’s likely to retain his place at right-back.

A rock at the back, Goldson has been a regular fixture in Gerrard’s side. He should keep his place in central defence.

Helander played the full 90 minutes against Porto, so Gerrard could bring back Katic in central defence at the weekend.

Barisic has cemented his place at left-back and should start against Motherwell.

Kamara has established himself as a key player under Gerrard. His energy and intensity could make a difference for the Gers on Sunday.

Davis has been a regular fixture since the start of the season. The experienced midfielder will retain his place in the team.

Aribo came on a substitute in the 1-1 draw with Porto. So, he’s likely to be fresh to start the game against Motherwell.

Arfield offers a different dimension to Rangers’ attack. His late runs in the box make him such a dangerous player to contain for the opposition.

Ojo has been a breath of fresh air for the Gers. The 22-year-old’s direct running and movement could cause some problems for the Motherwell defenders at the Ibrox.

A fantastic finisher and an able creator of goals, Morelos is a real handful for the defenders. The stocky Colombian will look to continue his goalscoring form for Rangers. 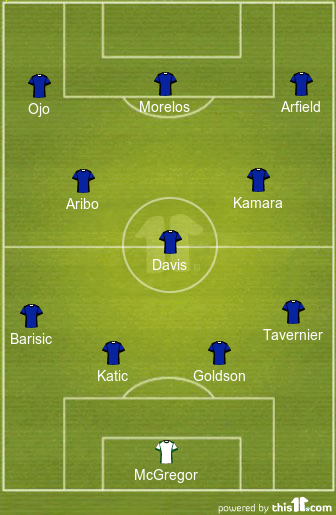