Arsenal welcome Crystal Palace at the Emirates Stadium on Sunday, hoping to bounce back in the Premier League.

The Gunners were on an unbeaten run of five league games but on Monday they went down 1-0 rather surprisingly to Sheffield United away from home. However, they produced a memorable 3-2 comeback victory over Vitoria SC in the Europa League on Thursday that should have given Unai Emery’s men a lot of confidence.

Meanwhile, Crystal Palace have made a strong start to the season and will aim to take all three points at home from the Emirates Stadium, just like they did last campaign.

Arsenal only have Reiss Nelson out with a knee injury.

Leno is Arsenal’s first-choice between the sticks and that won’t change against Crystal Palace.

Chambers has done a solid job at right-back this season and deserves to start on Sunday. However, he’ll have to be at the top of his game to keep Zaha at bay.

Sokratis hasn’t been convincing at all this season, making silly errors at the back. He’ll need to find his mojo if Arsenal are to get three points on Sunday.

The Brazilian is a ticking time-bomb and the Palace forwards will certainly target him at the weekend.

With Tierney playing the whole game against Vitoria on Thursday, Emery could go with Kolasinac at left-back at the weekend.

Guendouzi is an all-action midfielder and is a certainty to start in the upcoming Premier League game.

Xhaka has come under a lot of criticism for a series of uninspiring displays in the middle of the park. Yet, the Swiss is expected to start against a tricky Palace side.

Two majestic free-kicks from Pepe helped Arsenal produce a 3-2 comeback victory over Vitoria SC. The Ivorian will be raring to build on against Palace.

Ceballos is a classy operator of the ball and will be the player that links the midfield and attack. The Spaniard should start in the no.10 role.

Saka has been one of the Arsenal academy stars to impress this season and he’s likely to start on the left flank against Roy Hodgson’s side.

With seven goals in nine league games, Aubameyang is expected to continue leading the Gunners’ attack. 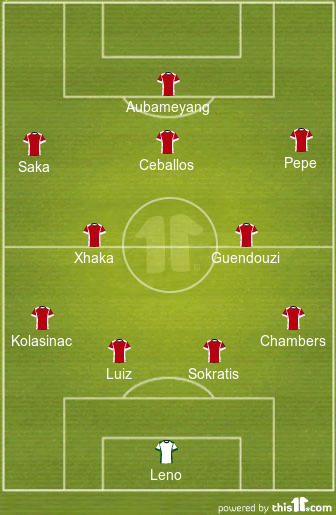