Celtic travel to Pittodrie Stadium to face Aberdeen on Sunday, hoping to retain the top spot in the Scottish Premiership table.

Neil Lennon’s side swatted aside Ross County last time out, with that 6-0 win coupled with Rangers dropping points at Hearts seeing the Hoops pass their city rivals. They also earned a fantastic 2-1 success over Lazio in the Europa League on Thursday.

Aberdeen, meanwhile, picked up a huge confidence-boosting win at Motherwell last Saturday to move within one point of the third spot.

Oliver Ntcham missed the Lazio clash but is expected to be fit for the weekend. Mikey Johnston and Leigh Griffiths remain sidelined.

Ryan Christie will serve his second of a three-match ban following a red card against Livingstone before the international break.

Fraser is Celtic’s first-choice keeper and should be the case on Sunday as well.

Frimpong enjoyed a fantastic debut for Celtic against Ross County. While he wasn’t included in the squad for the Lazio game, Lennon might bring him back for this game.

Scored the winner against Lazio with a towering header on Thursday. Jullien is a certain starter for the Hoops.

The left-back has looked assured in the last few games and should keep his place at left-back.

Brown’s experience will be needed in the middle of the park for such a big game at the weekend.

Partnering Brown in the middle of the park will be McGregor, who is a busy player and has the vision to pick out a pass in the final third.

Forrest will be a big threat down the right for the Aberdeen defenders. If he can find his rhythm, the Scotsman can be unplayable on Sunday.

Ntcham wasn’t fit enough for the Lazio clash but he is expected to be ready for the game at Pittodrie. He’ll start in the no.10 role.

Elyounoussi failed to dazzle on Thursday but going by his performance against Ross County last weekend, he deserves to keep his place in the team.

Edouard is in red-hot form at the moment and simply cannot be dropped. He’ll lead Celtic’s attack against Aberdeen on Sunday. 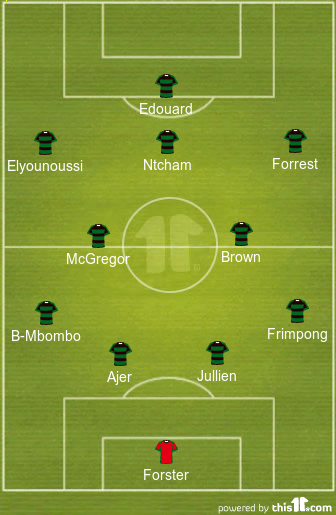