Liverpool returned to winning ways against Huddersfield Town after Mohamed Salah slotted in a neat finish to hand them a 1-0 victory at the John Smith’s stadium. The Reds were winless in their last 4 games but will now aim to maintain the form against Red Star Belgrade in the Champions League.

Klopp’s side succumbed to 1-0 loss to Napoli last time out and a win this week should see them cement their spot further.

Klopp was boosted by the returns of Virgil Van Dijk and Mohamed Salah in the last game. Sadio Mane is also set to return given that he was rested over the weekend as a precaution. Adam Lallana also made his way back into the squad.

The Brazilian has been excellent in goal, making a number of vital saves for the Reds. He does need to be careful with the ball at his feet though.

The youngster was rested during the weekend and should return to the squad for this game.

Lovern looked good after returning to the squad this season. He really has responded well to his critics.

The Dutchman has been an immense motivator and influence at the back for the Reds. He will definitely start this game as well.

Robertson is one of the most consistent performers in this team and his raids down the left flank will be fruitful for Liverpool in this game.

The Dutchman was a second-half substitute against Huddersfield and should take up his central midfield role for this one.

The Brazilian should be given his first European start for the club in this game. He was neat and tidy after coming on against Huddersfield Town.

Milner is the epitome of consistency and he should retain his place in the line-up for this game.

The Egyptian will now be aiming to maintain his goalscoring form after nicking the winner against the Terriers.

Firmino has failed to hit his high standards from last season and needs to step up his performances.

Mane should return to the lineup after he was rested against Huddersfield Town. 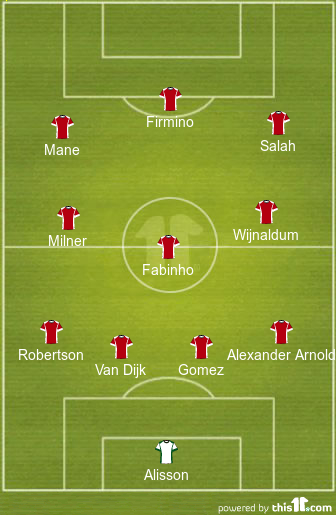