Premier League champions Manchester City will travel to Ukraine to face Shakhtar Donetsk in a Champions League group stage encounter. The Cityzens brushed aside Burnley 5-0 in the league to continue their positive momentum after the international break.

Pep Guardiola’s men will be looking for three points from this game and get one step closer to the knockout phase. They will face a Shakhtar side who are on top of the Ukrainian domestic league. Hence, this won’t be an easy match for the Cityzens.

Kyle Walker missed the Burnley game due to a minor groin injury. But the Englishman is expected to be back on Tuesday. Ilkay Gundogan and Danilo are out for a few weeks, while Claudio Bravo is a long-term absentee.

Didn’t have to make a save during the weekend, however, he would be expecting a tougher test in Ukraine.

Missed the Burnley game due to a minor niggle but he would be back for this Champions League tie.

The captain is expected to play because this is an away game in Europe. His experience at the back is necessary. He was solid against the Clarets too.

The Frenchman has made a great start to the season and has nailed down the centre-back spot.

A fully-fit Mendy is always good for City as he provides the athleticism required from a ‘Guardiola’ full-back.

The ever-dependable Fernandinho will shield the back-four and solidify the midfield. He is an important member of the team.

Ran the show against Burnley and looks good every time he steps onto the pitch.

Played a cameo role on Saturday after a long injury layoff. This could be the game for the Belgian to return to the starting XI.

The Englishman was rested against Burnley. Therefore, he would be fresh to play in Ukraine.

Scored his customary goal in the league and is a threat to any defence in the world. The Shakhtar defenders have to come up with something to stop the Argentine.

Read More: Why Man City over Man United is a better destination for this £52m-rated Dutch league starlet

The German is slowly regaining his top form, which is bad for any full-back in Europe. He should start in his favoured left-wing position. 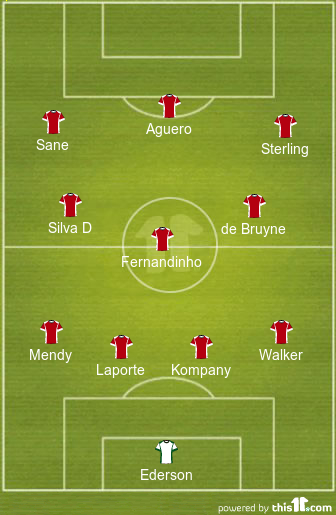