After drubbing Porto and reaching the Champions League semifinals, Liverpool turn their attention towards the Premier League title race. Their next opponents are Cardiff City this Sunday, and a win will take them top of the table regardless of what Manchester City do on Saturday.

Jurgen Klopp’s side are high on confidence going into this game and the momentum is on their side. However, Cardiff will be a tough nut to crack, especially at their home ground. Hence, the Reds have to be at their best to get three points on Sunday.

Adam Lallana wasn’t risked for the Porto game. He remains under scanner. Dejan Lovren fell ill and missed the trip to Portugal. He is expected to be back in the squad. Alex Oxlade-Chamberlain continues his recovery work from long-term injury.

The youngster was subbed off around the 65th minute on Wednesday, possibly with an eye on this game. He is expected to start.

The former Cameroon international continues to deliver the goods for Liverpool at the back. Even if Joe Gomez comes back, Matip deserves to start.

He is one of the irreplaceable cogs in the team who starts almost every game.

The Scotsman was slightly under-par against Porto. He is still the first-choice left-back and should start on Sunday.

The Brazilian has been fantastic in defensive midfield since the turn of the year. Along with van Dijk and the front three, he is slowly becoming an irreplaceable player in the team.

The captain has played a huge part in the last few weeks, operating in an advanced midfield role. He should start on Sunday.

The Guinea international was rested in midweek, hence, he is expected to start on Sunday.

The Egyptian is back in form for the Reds, which means danger signs for Cardiff defenders.

He played the second half of the Porto game as Klopp wanted to rest him for some time. The Brazilian is expected to start on Sunday.

The Senegalese star is one of the in-form players in Europe. He would be looking to add to his season’s tally when he faces Cardiff. 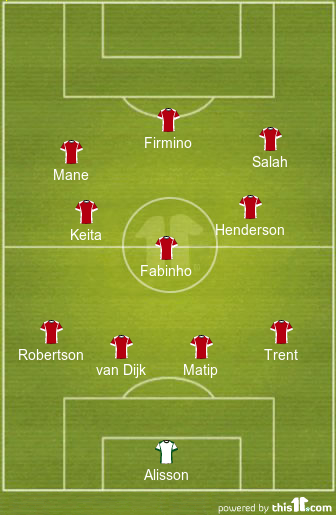