Aston Villa would be aiming to win their ninth consecutive league game when they face Bolton Wanderers away at Macron Stadium this Friday. Dean Smith’s men got the better of Bristol City this past weekend and made it eight wins of out of the last eight games.

As a result of that upsurge in form, the Villans have jumped up to fifth position in the table, five points clear in the race to finish in the playoff spots.

On Friday, they will be up against a Bolton side who are all but relegated from the Championship and have been in torrid form. Hence, on paper, it looks like Villa will get the win away from home, but nothing can be taken for granted.

Jack Grealish was ill and missed the previous game. He is expected to be back for Friday. Jonathan Kodjia suffered a crack in the ribs last week. He missed the last game and is a doubt for this one.

Kortney Hause had a rib issue when he played against Sheffield Wednesday a week back. He is also in doubt to feature on Friday. Tommy Elphick is back in training but would require one more week to make a comeback into the XI.

James Chester is also back in training following his knee injury. However, he may not feature on Friday. Lovre Kalinic had a problem while on national duty and should be back fit by next week.

With Kalinic out, Steer is expected to be in goal on Friday, just like the previous few games.

Ahmed Elmohamady was getting caught defensively against Bristol. Hence, we could see the experiened Hutton taking his place on Friday.

Amidst injuries to three centre-backs, Jedinak has stepped up and done well in that position. He is expected to start against Bolton.

He has shown good form since returning from injury. Dean Smith would be hoping that he remains an integral part of this team going into the final four games.

The Welshman was superb against Bristol. He is slowly making that left-back spot his own.

Stationing himself in defensive midfield, Whelan has been doing a good job of mopping up possession, intercepting passes and starting attacks from deep. He should start on Friday.

He is one of the first names on the teamsheets this season. However, he is two yellow cards away from a three-game suspension. Villa would be hoping the youngster remains disciplined in the next four games.

Another player who is in good form and should be starting on Friday without a shadow of a doubt.

He was ill and missed the previous game. Expect the Englishman to start on Friday, possibly on the left wing.

The Chelsea loanee has kept his good form going for the majority of this season. He should be leading the line against Bolton on Friday.

El Ghazi was one of the star men against Bristol in the wide areas. He is expected to keep his place in the team, perhaps on the other wing. 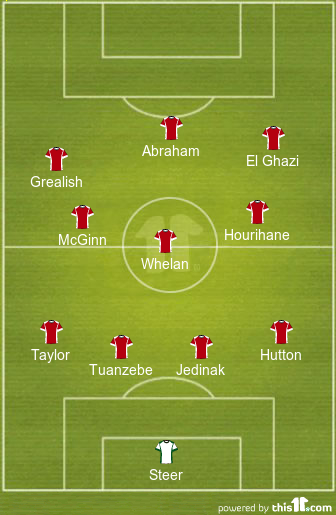