Two consecutive wins in a row has seen Leeds United find their way back into the title race and have confirmed their place in the top six. However, Norwich City’s lead has now been reduced to four points and that gives the Whites an advantage going forward.

With just five games left in the season, Marcelo Bielsa and his men will have to win nearly every game to outdo Daniel Farke. Their next challenge comes in the form of Wigan Athletic, who are winless in their last four games, including a 1-1 draw against Norwich City.

Furthermore, they are inches away from the relegation zone, with just two points separating them and the final relegation spot. This does put the Latics in trouble and the game against Leeds United could be the perfect chance to move forward.

Barring Barry Douglas and Jamal Blackman, Leeds United have a fully fit roster at their disposal.

Now Marcelo Bielsa’s main man between the sticks, the Spaniard has missed just two games since his arrival.

The 27-year-old has done well for the Whites this season and so much more is expected from the Englishman.

The club’s most reliable centre-back, Jansson played well in their last game and should keep his place.

Among Leeds United’s best players this season, Cooper is the captain and they’ll need his presence in the final few days.

A talented player, Alioski has done well since his switch to left-back and has played 41 games so far for the club.

23 years old and Philips has had a rather fantastic season for the club, becoming a key star for Bielsa.

Despite being 33 years old, Hernandez has proven to be a big hit this season, contributing to 23 goals so far this season.

He’s played every single game this season, including 41 appearances in the Championship. A sure starter.

While Forshaw hasn’t played too many games for the club this season, the 27-year-old could find his way back into the team.

A talented young starlet, Clarke has a bright future but needs to start stepping up and contributing with goals and assists.

While he did struggle after his initial move to Leeds United, the 25-year-old has finally found his stride. 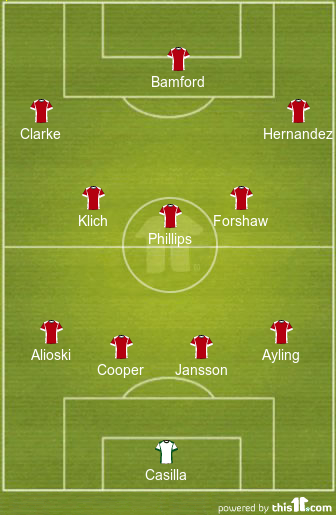