West Ham welcome Norwich City to the London Stadium as Manuel Pellegrini looks to make it two Premier League wins on the bounce on Saturday.

The Hammers won 3-1 at Watford last weekend before beating Newport County in the second round of the Carabao Cup on Tuesday. There is momentum building for Pellegrini’s side that endured a tough start to the new campaign.

Their opponents on Saturday, Norwich City lost a close encounter to Chelsea last weekend and they’ll be eager to bounce back at the London stadium.

Michail Antonio got injured early against Newport County and could be set for a few weeks on the sidelines at the very least. Javier Hernandez missed the Carabao Cup game with a knee injury but could recover in time to face Norwich.

Fabianski is one of the underrated goalkeepers in the Premier League. He is West Ham’s undisputed No.1 and should keep his place in the team.

Fredericks was poor against Watford but with Zabaleta getting a run out in the Carabao Cup, Pellegrini could stick with the Englishman against Norwich.

Ogbonna was shaky against Watford, so that could see Balbuena return to the starting XI against the Canaries.

Diop has been surprisingly sloppy as well, committing silly fouls and errors while defending. The Frenchman has to improve and be at his best to stop the in-form Pukki.

Masuaku started the game at Watford and should retain his place in the team considering that Cresswell played in the midweek Carabao Cup game.

One of West Ham’s best players last campaign, Rice is a certain starter against the Canaries on Saturday.

Noble marked his return to the team with a penalty against Watford. He will lead the team out at the weekend.

Antonio is expected to miss a couple of weeks after getting injured against Newport, so Pellegrini could hand a start to Yarmolenko, who completed 55 minutes last weekend after recovering from a long-term injury.

West Ham’s creative ace, Lanzini will offer the zip and guile to the team’s attack from the No.10 role.

Anderson adds a lot of pace, energy and flair to the West Ham attack. He is an undoubted starter on the left flank.

Scored a brace at Watford and is looking like an inch-perfect striker for Pellegrini. Haller is expected to lead the line against Norwich. 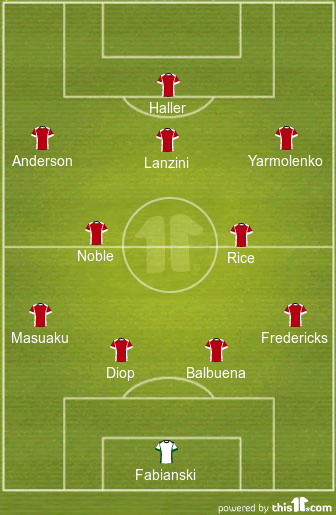