Leeds United welcome Swansea City to Elland Road on Saturday, hoping to maintain their position at the top of the Championship table.

The Whites tasted their first disappointment of the season when they were knocked out of the EFL Cup by Stoke City on Tuesday night. They came from 2-0 down to send the Cup tie to penalties, but Jack Harrison’s crucial penalty ended up hitting the post and Stoke progressed through to the next round.

Marcelo Bielsa’s side will be eager to dust themselves off and bounce back against Swansea, who are second in the table and unbeaten in the league.

Luke Ayling and Tyler Roberts are rapidly progressing with their rehabilitation. Liam Cooper missed the midweek Carabao Cup game with an unspecified injury but is expected to regain full fitness ahead of Saturday’s game.

Casilla is the first-choice goalkeeper for Leeds United and he is expected to retain his place in the team.

Dallas has been in really good form, and after sitting out of the midweek Carabao Cup game, he is expected to start against Swansea.

White is a ball-playing defender who has brought stability to the Whites’ backline following Jansson’s exit.

Cooper is expected to be fit ahead of Saturday’s encounter and start alongside White in central defence.

When fit, Douglas is Leeds’ first-choice at left-back. A good passer of the ball, the ex-Wolves star is certain to start against Swansea.

Phillips is one of the best midfielders in the Championship and is an undoubted starter against the Swans.

Hernandez brings a lot of creativity and flair to the Leeds attack. He should start on the right flank.

Forshaw has been fantastic for Bielsa’s side so far this season, providing a lot of energy and intensity to Leeds’ press.

Klich has enjoyed a good start to the new season and will be eager to keep putting in solid displays.

Harrison will be desperate to redeem himself after missing the decisive penalty in the shootout against Stoke. He’ll keep his place on the left flank.

With four goals in five league games, Bamford is high on confidence and will be keen to get on the score-sheet on Saturday. 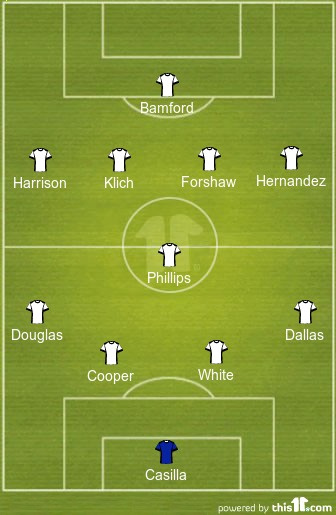