After thrashing West Brom last Friday, Leeds United would be aiming to keep the automatic promotion hopes in their own hands when they face Bristol City away at Ashton Gate this Saturday.

They are up against a Bristol side who haven’t won in their last three league games but still find themselves at sixth place in the table and with a chance to finish in the playoff spots.

On current form, this could be a tricky game for Leeds as their away form since the turn of the year hasn’t been great.

Kemar Roofe is out for a few weeks and might not come back before April. Jack Clarke and Adam Forshaw are getting closer but may not make it for this game.

Since arriving in the January transfer window, Casilla has been the first-choice keeper in the team and starts every league game.

His form in the past couple of months has been sticky but he played well against West Brom to reignite the confidence. The right-back is expected to keep his place.

The Swede is performing at a higher level on a consistent basis now, which is good news for the Leeds fans. He is probably the first name on the teamsheet.

The captain is forming a good partnership with Jansson and has improved his form lately. A certain starter for Saturday.

Their first-choice left-back, Barry Douglas is back to full fitness but the way Alioski has been performing in that position, especially in the game against West Brom, the manager may persist with the latter this weekend.

The Englishman is the team’s first-choice defensive midfielder and he bossed the game against the Baggies. He is an important player under Bielsa and should start at Ashton Gate.

The Spaniard is at his best playing on the right wing and creating chances by cutting inside into the half-spaces. He is Leeds’ most creative player and the one to keep an eye on.

He took the game to West Brom and produced his best display in the Leeds shirt. That performance may have earned him a place in the team for the upcoming games.

The Poland international never disappoints when it comes to showing energy and passion in the middle of the park. Having started every league game this season, there is no doubt he will do so in the next two months.

After a run of games where things didn’t go his way, Harrison produced a good performance against West Brom. That would have helped him earn the trust of the manager. He is expected to start on Saturday.

With Roofe injured, Bamford scored a brace last Friday and let everyone know he is there to help the team. The former Middlesbrough man is expected to lead the line at Ashton Gate this weekend. 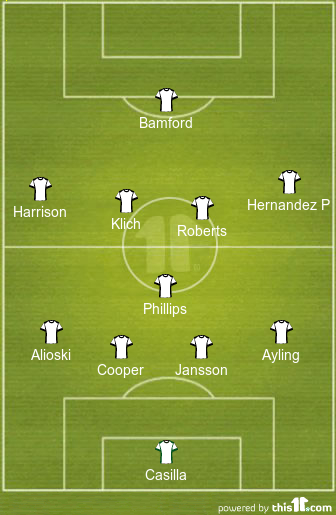