In their last outing in the championship, a dynamic Aston Villa side triumphed comfortably over an injury-hit Derby County, with Frank Lampard’s men going down to a 4-0 defeat at Villa Park.

They now face Birmingham City, who will be looking to bounce back from their weekend defeat against Hull. Villa a win here to maintain the pace with the leading pack in their bid to reach the playoff spots in the remaining weeks.

Jordan Lyden and Orjan Nyland have both sustained knocks that will keep them out of action at least until the end of the current season. Tommy Elphick is another massive miss, who isn’t expected back until April.

James Chester and Henri Lansbury are both back training but whether or not they are fit enough to start this fixture is still a doubt.

Likewise, Axel Tuanzebe’s injury is set to keep him out until the end of March as well. Alan Hutton and Keinan Davis remain doubtful for this game as well.

Picked up a concussion but has recovered well. He is expected to start this crucial league clash.

Alan Hutton’s injury should fore Elmohamady into the squad at least until his return. His experience will be crucial as well.

With James Chester’s injury and now the devastating news of Elphick’s prolonged knock, Taylor should be given a run of games.

This Bournemouth loanee will have to be at his best in the absence of Elphick and really commandeer this defence.

The Englishman’s performances since making the loan switch from Wolves have prompted a good respons from the Villa fans.

The Ghanaian winger is expected to start in his usual role on the right flank given the form he has shown over the course of the season.

The Irishman has slotted in well in the midfield for Villa this term and is a good alternative to ageing star Glenn Whelan.

The veteran of the English game is now 35 years old and is still a massive asset to this dynamic yet steady Villa side.

The Dutch winger has a massive future ahead of him given that he’s just 23 and performing at such a high level.

The Englishman’s return from a prolonged injury has been seen as a saving grace for Villa’s season. He is expected to start behind the striker.

Chelsea’s prized possession, the forward’s goalscoring tally this season has been nothing short of remarkable and he will be keen to start. 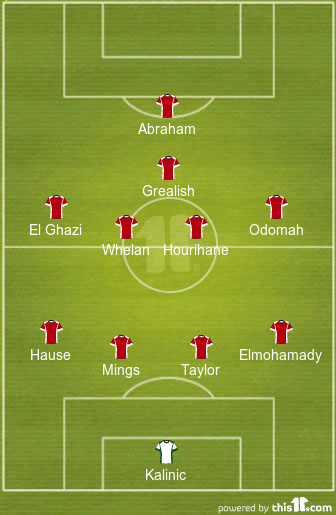