Sheffield United will be aiming to keep their automatic promotion hopes alive when they face Rotherham at Bramall Lane this Saturday.

The Blades could only manage to get a point in the Sheffield derby on Monday night, meaning they are now third in the table, two points adrift of second-placed Leeds United.

They are up against a Rotherham side who are fighting to stay in the Championship for one more season. As of now, the Millers are 22nd in the table but haven’t lost a league game in six.

Hence, expect a tight encounter between two teams who have everything to play for the remainder of the season.

Jake Wright is back in training and it remains to be seen whether he will be included for the weekend. George Baldock is being checked on a day-to-day basis.

He is the Blades’ first-choice and would remain in goal for the all the league games.

Came back from suspension in the previous game and did well. He is expected to keep his place on the right-hand side of the back three.

He has been a solid presence in central defence for Sheffield United and is in line to start on Saturday.

Struggled a bit in the derby but was solid enough defensively. He completes the back three for Wilder’s men.

In the potential absence of Baldock, Freeman is expected to keep his place at right wing-back.

He was slow to start off against Wednesday but came back to life after half-time. Expect him to start in central midfield on Saturday.

He has been one of their consistent players in the midfield and is almost certain to start this weekend as well.

Fleck is on the list of players who is a regular starter in the midfield for the Blades. He has played all but one game this season and should continue to do his job in the midfield on Saturday.

He was back in his favoured left wing-back position on Monday and played well. Expect the Irishman to feature again against Rotherham.

The veteran has already scored 22 league goals this season. Sheffield United fans would be hoping for more as they try their best to get promoted to the Premier League.

Gary Madine received a hostile atmosphere against Sheffield Wednesday and struggled to have an impact. Hence, we could see McGoldrick back in the team for this weekend’s game. 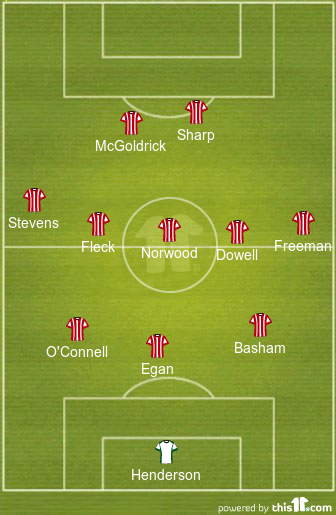