Aston Villa fought for a 2-2 draw against Stoke City last weekend as the Villans still languish right outside the playoff zones. Dean Smith’s side have done well in recent weeks and are pushing to get promoted at the end of the season.

But the Villans will have a tough test when they come up against league leaders Leeds United at the Villa Park this weekend. The Peacocks are also on the back of a good win and have been in good form. Smith’s men have to be at their best to get something out of this game.

Made a couple of important saves to deny the Potters a win. He will surely keep his place between the sticks.

The Egyptian should continue down the right flank against the Peacocks as well. His raids have been very fruitful for them.

The youngster should continue at the back after showing great form under the new manager. He has been a vital cog at the back.

Chester should continue alongside Tuanzebe. The pair has looked good together at the back.

Hutton did well after being shifted out to the left last game. He really is a versatile full-back.

Whelan will continue to dictate play in the middle of the park. However, his defensive work rate will have to be improved in this clash.

The Dutchman will continue to raid down the right flank against Leeds United as well. His pace should cause all sorts of problems.

Hourihane should continue to attack from the right side. His passing has been good over the last few games.

McGinn will partner Hourihane in the attacking midfield once again. He has looked dangerous in the final third.

Bolasie’s dribbling and directness should pose all sorts of issues at the back for Leeds United.

He is their in-form player at the moment and cannot stop racking up the goals. Abraham will surely lead the line. 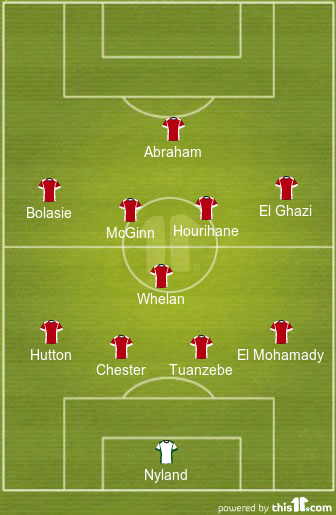