Predicted Wolves line-up to face Bournemouth in the Premier League

Wolves would be aiming to keep their two-game winning streak going when they face Bournemouth in the Premier League this Saturday at the Molineux. Nuno Espirito Santo’s men clinched a last-minute goal to get three points away at Newcastle last week, four days after defeating Chelsea in the mid-week.

Hence, the Old Gold are back in form and looking upwards in the table. They are up against a Bournemouth side who have been in a bit of a free fall of late, but still lie eighth in the table. These two teams are separated by just a point in the standings, so the game should be tight.

Jonny continues to nurse his injury and will only make a comeback by the end of this month.

The Portuguese is a mainstay in goal and will continue to keep his place for every league game.

Using Bennett as the right-sided centre-back has worked best for Wolves. He should continue to keep his place.

The captain has been fantastic this season, leading the side well and doing his defensive job with utmost commitment.

The Frenchman is a solid presence at the back and he is good on the ball as well. A complete package of a centre-back Wolves could do with every week.

The buccaneering wing-back has popped up with goals in the past few weeks. His running power has been exceptional, to say the least.

He came off the bench against Newcastle as Nuno attempted to shuffle the pack. The experienced Portuguese should be back in the line-up for this game.

The youngster has been in and out of form in the past few weeks, however, his influence in the midfield is priceless.

With Jonny still out, Vinagre is expected to operate at the left wing-back position.

The Portuguese has been in great form in the past couple of games. Nuno would be hoping for more of the same on Saturday.

The winger needs to add final product to his game in order to impact the games in the final third.

Read More: Wolves already have a ready-made striker in their team and they must sign him permanently instead of looking elsewhere – opinion

The Mexican is a key player in the team and is the only available option to lead the line. He has been good this season. 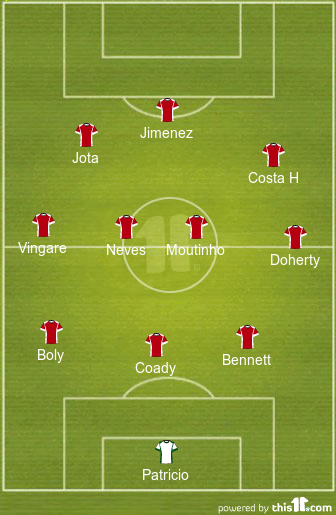