Newcastle United would be aiming to get back to winning ways when they face Huddersfield Town at the John Smith stadium this weekend. The Magpies suffered a last-minute heartbreak when Wolves handed them a 2-1 win loss with Matt Doherty’s 95th-minute winner.

Rafa Benitez’s men are now up against a Terriers side who lost their previous game to Arsenal. These teams are separated by three points and three places in the table, hence, this is a six-pointer clash between them.

DeAndre Yedlin is suspended for this game after getting a straight red card in the last game. Federico Fernandez suffered a calf strain against Wolves and might not be risked. Jonjo Shelvey and Isaac Hayden are the other injury concerns.

The keeper is one of the key players in the Newcastle team, which speaks volumes about how reliant they are on him.

With Yedlin suspended, Manquillo could be switched to the right-back slot.

The captain has been in decent form whenever he has started. His leadership at the back will be key, especially in the absence of Fernandez.

With Fernandez out, Clark could be deployed in a four-man defence, with him partnering Lascelles.

The Welshman is fit now and should start this game as a left-back.

The South Korean has added a sense of calmness around the Newcastle midfield. His movement has been fantastic.

Diame’s work rate on and off the ball is something which makes him a regular starter in the team.

It would be better to play Ritchie as a winger rather than as a wing-back. His left foot is pretty good and it could trouble the opposition.

The Spaniard scored last week as he has continued to pick up form in the past few weeks.

Kenedy’s runs and crosses into the box from the left-hand side would be ideal for the Magpies. It will also be helpful in breaking down a stubborn Huddersfield rearguard.

Read More: This 28-year-old Russian veteran could be the man to save Newcastle from relegation and Benitez must get him in January

The Venezuelan has been a great addition to the team as a striker. Newcastle fans would be hoping he continues his form and stays here for a long time. 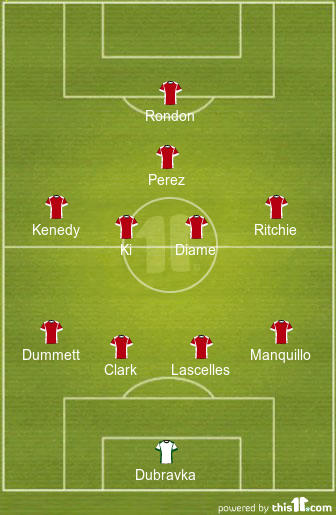