Derby County will be aiming to keep their two-game winning run going when they face Nottingham Forest at Pride Park in a Monday night game. Frank Lampard’s men just about scraped past 10-men Wigan Athletic last week to move themselves up to fourth in the league table, six points behind leaders Norwich City and five behind the automatic promotion spot.

The Rams are up against a Nottingham side who have won three of their previous five games, drawing the other two. Hence, they will come with confidence and try to make it tough for Derby on the night.

Bradley Johnson is suspended for this game. Curtis Davies is probably out for the season along with Craig Forsyth. Mason Bennett is out until March, while Joseph Ledley is back in the training. Marcus Olsson is out until February.

The experience of Carson in goal has been fruitful for the Rams throughout this season. He brings an air of calmness at the back.

Assisted Jack Marriot’s goal last week and looked a real threat going forward from right-back. Nottingham wide players must be wary of that.

The solid presence of Keogh in central defence has been fantastic for the team. He was brilliant last week as well.

The loanee from Chelsea has done well alongside Keogh in central defence. Apart from the own goals he has scored, this has been a good season for him so far.

Malone loves to move forward, just like Bogle. He provides the width on the left-hand side.

The orchestrator of what Derby do in the midfield. The former Tottenham man is very good on and off the ball while shielding the back-line.

He battles in the midfield and works hard for the team. Those things could be vital against Nottingham on Monday.

The loanee from Chelsea moves the ball in the team and tries to make things happen from the midfield. He is a key player.

The loanee from Liverpool has been in great form in the past month or so. And he doesn’t score simple goals either, as he mostly scores from outside the box which makes him a special player.

Scored the winner last week. He looks a real threat when leading the line.

Read More: Lampard raiding Chelsea in January for this 24-year-old forgotten figure would be a huge coup for Derby County

Tom Lawrence really struggled to get into the game last week. Hence, we may see Josefzoon on the left wing for the Rams. 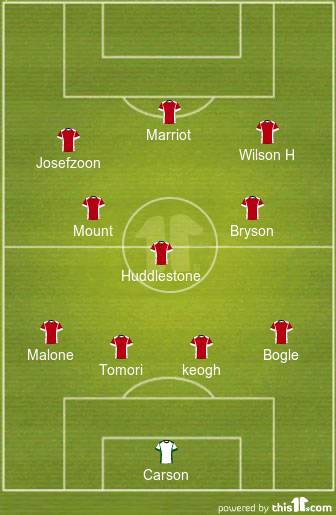