Predicted Sheffield Wednesday line-up to face Swansea in the Championship

Sheffield Wednesday would be aiming for an important win when they face Swansea City away at the Liberty Stadium this Saturday in the Championship. The Owls came from behind to claim a 2-2 draw against Rotherham last week, keeping them at 17th position in the table, six points away from safety and 12 behind the promotion playoff places.

Jos Luhukay’s men are up against a Swansea team who broke their three-game losing run by beating Brentford last week. Hence, it won’t be easy for Wednesday away at Wales against a team who have returned to some form.

Barry Bannan is suspended for two games after picking up his 10th yellow card of the season last week. Fernando Forestieri will be back in action by January, while Gary Hooper and Kieran Lee are also expected to return by New Year. Almen Abdi is back in training.

Dawson’s saves have been vital to the team time and time again. Wednesday could have been in a worse position had it not been for the keeper.

As reiterated before, the captain looks comfortable in a back three and should continue to play that wide centre-back role.

The loanee from Chelsea has been decent ever since he started playing games this season.

Jordan Thorniley has looked uncomfortable with ball at his feet and also in defending certain situations. Hence, the experience of Pudil could work better for the team.

As a right wing-back, Baker needs to improve his work in the opposition final third. However, he defends his area pretty well.

With Bannan suspended for two games, we could see Onomah deputise for the star man.

He is slowly becoming a work horse in the midfield, which is good for the team.

Started last week after a while and looked comfortable defensively. Luhukay would want more in the wide attacking areas though.

One of the attacking threats in the team and his quality is always there to be seen in games.

Scored a brace last week, therefore, he should be in great confidence coming into this game against the Swans.

It is one way or other for Luhukay in terms of picking a striker. Both Atdhe Nuhiu and Fletcher haven’t been great. However, the latter offers more and possesses experience. 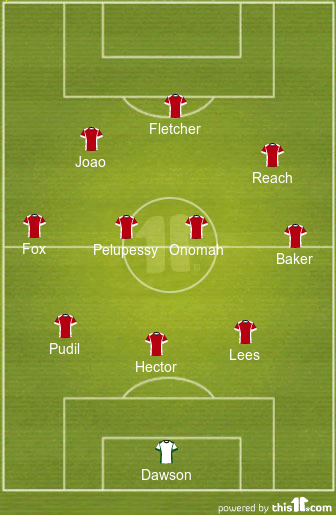