Manchester United lost to Valencia in the Champions League and have been in poor form as well. The Red Devils did pick up a win against Fulham last weekend but the real test will come against Liverpool at Anfield this weekend.

The Reds have been in superb form and are on top of the table right now. They are unbeaten as well and are proving to be a force to reckon with. Jose Mourinho will have to be wary of a number of potent options in the Liverpool team.

Alexis Sanchez, Victor Lindelof, Anthony Martial, Luke Shaw and Chris Smalling are all out injured and will be out for this game. Eric Bailly has returned and started against Valencia. Jose Mourinho will have to make do with his current crop of players.

Surely, De Gea will have a job on his hands against Liverpool. He will keep his place between the sticks.

Valencia will start at right-back in this game as well. His pace should cause a few problems for Liverpool, who tend to have a tough time against the Colombian.

Bailly should continue at the back. He has to be fully focused against Liverpool.

Jones scored an embarrassing own goal against Valencia. With all the other defenders out, the English centre-back should start this one alongside Bailly.

Young should return to the line-up for this game. He was a second half substitute against Valencia.

Paul Pogba should return to take his place central midfield. His has to do better to convince Mourinho after recent weeks of instability.

Matic will have a tough test in the midfield to hold down Liverpool’s front three.

Mata scored a goal against Fulham and picked up an assist as well. He will start against Liverpool.

The English midfielder didn’t start against Valencia but he will start this one as a central attacking midfielder.

Rashford has been in very good form in the last few weeks. He should start this one on the left channel.

Read more: Who is this gifted 18-year-old talent being watched by Man United scouts? A big prospect for the future?

Lukaku did score against Fulham last week but didn’t do well against Valencia. He will have a stern test going up against Virgil Van Dijk at the back. 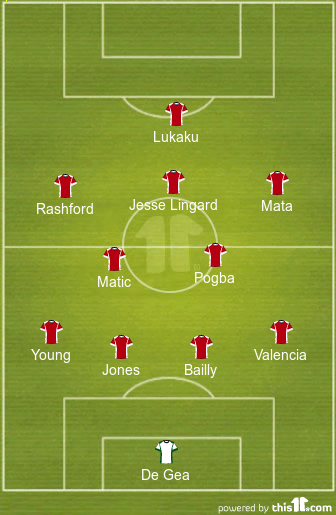