Predicted Arsenal line-up to face Southampton in the Premier League

Arsenal will be aiming to keep their unbeaten run going when they face Southampton at the St.Mary’s stadium this Sunday. The Gunners just scraped past Huddersfield Town in the league last week, with Lucas Torreira scoring the only goal of the game. They are well in the race for a top-four finish, but a tough Christmas period will be a test for new manager Unai Emery.

The north London outfit are now up against a Saints side who have new manager Ralph Hasenhuttl in charge. Hence, it won’t be easy for the away side even though the form is favouring them.

The German has taken the first-choice keeper role ahead of Petr Cech. He has done well since.

Due to lack of centre-backs, Emery might switch to a back-four, meaning Bellerin could play at right-back.

The German has been great for the Gunners this season. Expect him to come through his niggle and start on Sunday.

Played the Europa league game to probably prove his fitness. He is now available to start for Arsenal.

The Bosnian has been in good form in the past few weeks. Even though Nacho Monreal is back fit, Kolasinac should start.

The Uruguayan is possibly the signing of the season in the league. His contributions and impact in this team are immense.

Xhaka has improved massively playing alongside Torreira, helping the team to be a much better component in the midfield.

The German played the Europa League game and did well. He should be back in the line-up as a number 10 behind the striker.

The Gabonese has been in great goal-scoring form this season and Arsenal fans would be hoping for more of the same in the coming games.

The Armenian is surely running on last chance territory. He must begin to perform well or sit on the bench.

Read More: Arsenal should sign this 20-year-old Ligue 1 starlet to replace Ramsey even if it costs more than £36m

Lacazette is fully fit now and should lead the line for the Gunners. 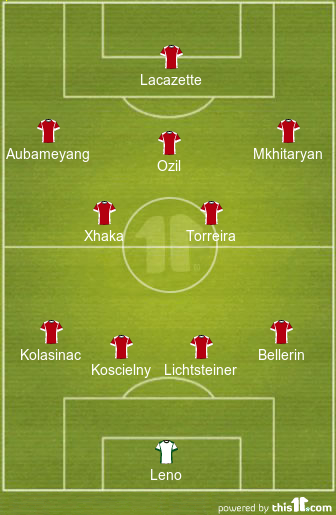