A number of stars returned to top form in Premier League Match-day 10 while many others failed to live up to the expectation. Liverpool romped to a 4-0 win against Cardiff City while Chelsea thrashed Burnley too.

Manchester United would be relieved to pick up an important win against Everton but Arsenal were unable to get past a rigid Crystal Palace side and had to share the spoils.

Bournemouth continued their superb form with another win against Fulham, piling the pressure on Salvisa Jokanovic.

Here’s the Premier League Team of the Week:

Though West Ham ultimately conceded a goal, it was via a deflection. The Polish goalkeeper was otherwise superb in goal and made a number of fine saves to keep the 10-man Hammers in the lead. West Ham had to settle for a draw but things could have been a lot worse had it not been for Fabianski in goal.

It was another dominant performance by Ashley Young who kept Richarlison at bay for most of the game. He was superb going forward as well and kept the ball well under pressure. Many expected Young to slowly fade away given his age but the former Aston Villa star has been a brilliant deputy at right-back.

Rudiger is proving to be a vital cog at the back for Chelsea this season. The German definitely has made new strides under Maurizio Sarri. He has barely put a foot wrong until now and has created a formidable bond with David Luiz at the back. The German will definitely play a key role for the Blues this season.

He was superb once again as the Reds demolished Cardiff City at Anfield this weekend. Van Dijk just doesn’t seem to have bad games or bad patches. He is constantly dominant and is rarely beaten in the air. The Dutchman almost scored his first Premier League goal for the club.

The Spaniard picked up the assist for Chelsea’s final goal against Burnley and capped an impressive performance. He rarely had trouble down the left flank and effortlessly dealt with anything that came his way. Alonso looked good going forward too.

Scored a sublime long-range goal and picked up two assists against Burnley. Barkley is finally showing signs of his old self and now looks a transformed player under Maurizio Sarri. He made most things happen for the Blues against the Clarets and has remained consistent over the last few weeks.

The Brazilian continues to impress in the middle of the park. He has started the last two games and has dictated the play well. Though Fabinho lacks pace, his defensive contribution was excellent. The former Monaco midfielder was good with his distribution as well.

Despite coming under heavy criticism in recent weeks, Pogba stepped up against Everton and tapped home after initially missing the penalty. He also picked up an assist and bossed the game in the middle of the park. The Frenchman must now aim to maintain consistency.

Once again, Martial was instrumental for Manchester United in their win against Everton. The Frenchman won the penalty for Pogba’s goal and scored a sublime second to hand all three points to the Red Devils. Jose Mourinho has to give him another chance now.

Wilson scored his 5th goal of the season with another brace against a fragile Fulham this weekend. The striker really has stepped up his performances over the years, under Eddie Howe. He has been a major factor in their top form this season and takes his spot as the best striker this week.

Pereyra scored a stunning solo goal as he waltzed his way past the Huddersfield defenders before coolly slotting the ball into the back of the net. He has been devastating for the Hornets this season and has played a part in most of their goals. 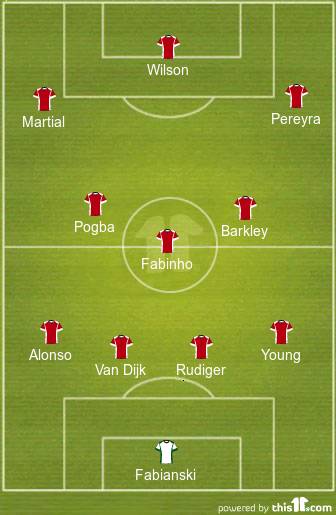