Leeds United are on the travels this weekend in the Championship to face Wigan Athletic at the DW Stadium. Marcelo Bielsa’s men got away with a fortunate draw against Nottingham Forest last week when Kemar Roofe seemed to handle the ball before scoring.

That aside, the Peacocks are in a rough vein of form at the moment, winning only three of their previous 10 games. The manager would be looking for a better performance, especially in front of the goal, to beat this out of form Wigan side.

Luke Ayling has a knee injury which will keep him out for two months. Barry Douglas has recovered and played for the U23s, hence, he should be in contention for Sunday. Gaetano Berardi may still be out for this weekend. Ryan Edmondson is sidelined due to an injury.

The youngster is slowly steadying himself between the sticks and is becoming a solid presence.

With Ayling out and Douglas expected to be back at left-back, Dallas may start at right-back for this game.

The Swede has been in good form at the back, however, his passing can improve further.

The captain would be aiming to perform better and take each game as it comes. He has been solid at the back.

The summer signing is back fit and played for the U23s to prove his fitness. He should start this game.

Phillips is an integral part of the team in defensive midfield, passing the ball with accuracy and shielding the back-line.

Leeds fans would be happy to see him in action after a period out due to injury. They will be hoping for some Hernandez magic in the coming games.

Forshaw was included in the line-up ahead of Samuel Saiz last week and performed decently. He probably deserves another go against Wigan.

He has been steady in the past few games without being spectacular. Bielsa would be hoping for more from the Pole.

Ezgjan Alioski’s form has not been up to the mark in the past few weeks. This might be the game for Harrison to get another chance, this time on the left wing.

Read More: Who is this versatile 20-year-old personally scouted by Bielsa? A big talent for the future?

Scored a controversial goal last week, however, his presence up top is always a good thing for the team. 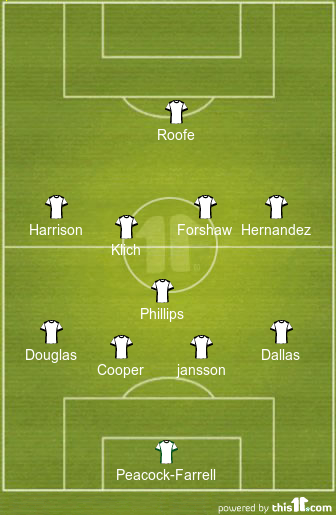