League leaders Sheffield United travel to the City Ground to play Nottingham Forest in the Championship on Saturday.

Sheffield United are in good form and come into the game on the back of a 4-2 win over Wigan Athletic, courtesy a Billy Sharp hat-trick.

Chris Wilder’s Blades will look to cement their position on the top with a victory over Nottingham Forest, who are six points and six places behind them in the Championship table.

Mark Duffy and John Egan missed out the last game with injuries and remain doubtful for the Nottingham Forest clash.

Chris Basham, meanwhile, picked up his fifth booking of the campaign in Sheffield United’s 4-2 victory over Wigan and will miss Saturday’s fixture.

Henderson has quickly established himself a fan favourite at the Bramall Lane. He is definitely going to keep his place in goal.

With Basham suspended and Egan a doubt, Wilder could decide to use Baldock is a three-man defence at the weekend.

Stearman is an experienced defender who would look to keep things tight at the back when Sheffield United face Nottingham Forest.

O’Connell is a regular fixture in the United line-up and should keep his place in the team.

Stevens has been a key figure in the Blades’ rise to the top of the league. He is a sure-shot starter at left wing-back.

Norwood has been a consistent performer in the engine room. He has made a real difference at the club since joining this summer.

Fleck is Norwood’s ideal partner in the midfield. The 27-year-old can ping the ball in every direction with ease. He is an important member of Wilder’s squad.

Sharp bagged an excellent hat-trick against Wigan last weekend. Forest have to be extra vigilant of Sharp.

Clarke could get another start with Duffy an injury doubt. He can link up very well with the midfield.

McGoldrick could be a real handful for the Forest defenders. He would be looking to haunt his former club on Saturday. 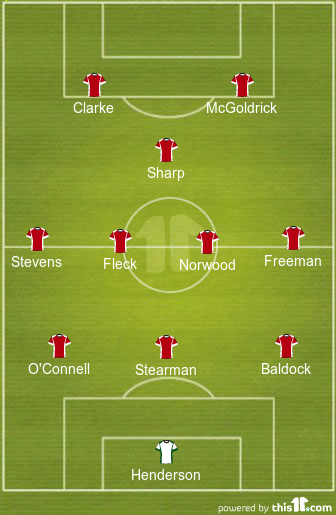