Hull City would be aiming to make it two wins in two when they face West Bromwich Albion at the KCOM Stadium this Saturday in the Championship. Nigel Adkins’ men beat Bolton Wanderers away from home last week to boost their confidence after a pale few games prior to that. Fraizer Campbell scored the only goal that day.

They now play against a team who are scoring goals for fun this season. The Baggies have netted 33 goals in 15 games, which epitomises their strength to beat the opposition by attacking well. Hence, it won’t be easy for the Tigers to face them.

Jordy de Wijs should be back for this game, which should be a relief for Adkins. Reece Burke is still a massive doubt. Ondrej Mazuch might considered for the squad while Angus MacDonald is out for a few more days. Evandro and Jon Toral are long-term absentees.

The experienced Marshall has been in terrific form this season, making some crucial saves in almost every game. A key player for the Tigers.

The loanee from Aston Villa is leading the back-line in fine fashion. He was at his solid best last week. He needs to be at his best to deny the West Brom attackers.

The youngster stepped up for Burke and de Wijs, and did a fabulous job alongside Elphick. He deserves another game, with Burke expected to be out for this game as well.

Due to a concussion, de Wijs wasn’t included for the game against Bolton. He is certain to start this Saturday though.

Lichaj would love to play a slightly advanced role at right wing-back. That way, he can impact the game on both fronts.

The 24-year-old was decent against Bolton, however, playing as a left wing-back might suit his game better.

The captain was involved in the build-up for the goal against Bolton and looked good in the game. He is expected to lead the side against West Brom.

Batty’s form in the past few weeks has been in good. Adkins would be hoping for more consistency from him.

Bowen has been Hull’s best attacker this season. He is always a threat to the opposition defence even when he has an off day. However, the final product was incisive against Bolton.

Assisted Campbell for the goal against Bolton and has been in good form. The Pole’s abilities on the ball are special.

Scored the winner last week and made runs to trouble the Bolton defence. The goal would have helped his confidence a lot. 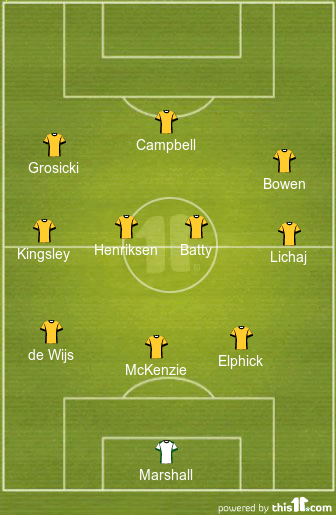