Predicted Burnley line-up to face Arsenal in the Premier League

Burnley were beaten by Tottenham Hotspur last weekend but they have looked better defensively over the last few games. The loss has seen the Clarets once again drop into the relegation zone and Sean Dyche needs to make amends soon.

But they have another big clash when they travel to the Emirates to play Arsenal this weekend. The Gunners tasted their first defeat in 22 games last weekend and will be aiming to bounce back as well. Burnley have to be at their defensive best in this game.

Stephen Ward, Steven Defour, Johann Berg Gudmundsson and Aaron Lennon are all out injured and will not be available for this game. Sean Dyche has had to deal with a number of nagging injuries since the start of the season and he will have to make do with the current crop.

Hart will definitely keep his place between the sticks. The English goalkeeper has done very well for the Clarets so far.

Bardsley has looked a lot better over the last few weeks and will keep his place for this game.

Long should continue as a part of the five-man backline once again. He looked good against Spurs.

Tarkowski will continue to lead the Clarets from the back. He has done much better since his return from injury.

Mee has been a mainstay in this squad and he will keep his place alongside Tarkowski.

Taylor has looked better going forward over the last few weeks. His deliveries have to be a lot better though.

With Lennon out injured, Wood could take the place on the right flank. He is capable of playing down the wings.

Westwood will keep his place in the middle of the park and aim to swiftly spray the passes.

Cork will continue to partner Westwood once more. He needs to be defensively aware against the Gunners.

Brady is going to be a major source of supply in this have. He needs to be at his very best if Burnley are to score goals.

Read more: Burnley’s season would take a massive turn if they sign this 24-year-old top Scottish league talent in January

Vokes will lead the line against the Gunners. He has done well but he needs to be more consistent. 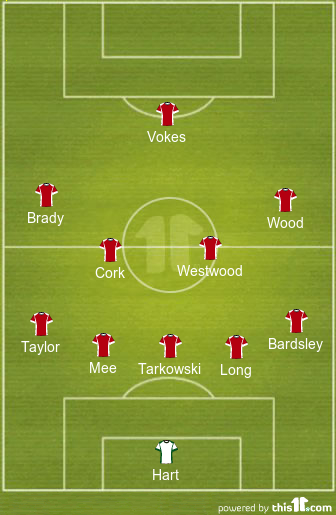