Wolves resume their Premier League duties on Saturday when they face Ralph Hasenhuttl’s Southampton at the Molineux.

Nuno Espirito Santo’s side defied the odds by toppling Manchester City at the Etihad Stadium despite having been in Europa League action in Turkey just a few days prior. After a poor start to the new season, very few expected the Wanderers to achieve such a result against the Cityzens.

Wolves will now be looking to follow the result up with a win over Southampton, who have lost three consecutive Premier League games.

Romain Saiss could miss the game with a hamstring injury he suffered in the 2-0 win over Man City. Bruno Jordan and Pedro Neto also remain unavailable.

Patricio is Wolves’ undisputed No.1 and he should start against Southampton on Saturday.

Traore hit both goals against Man City to get his season up and running. He was outstanding with his pace, power and clinical finishing at the Etihad and will look to impress his manager at the weekend as well.

With Saiss injured, Bennett is expected to come back into Wolves’ starting XI.

A leader at the back, Coady will be tasked with keeping the Southampton forwards at bay.

Boly has been a vital cog in the Wolves defence and is expected to start against the Saints.

Vinagre showed a lot of industry against Man City last time out. He should be given the nod ahead of Jonny at left wing-back again.

Neves dictates the tempo of the game from the middle of the park and is a certainty to start at the weekend.

The Portuguese veteran adds creativity to the side with his incisive passing. He should keep his place in the team.

Nuno could go with another ball-winner in the midfield and that should see Dendoncker retain his place in the team.

Jimenez is Wolves’ main source of goals and he’ll be looking to make a difference against Southampton.

Pacey, diligent and intelligent, Cutrone would fancy his chances against a shaky Southampton defence at the Molineux. 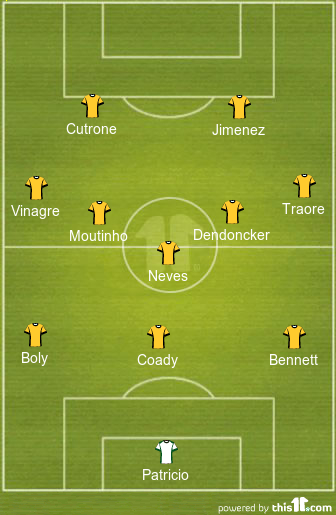