Celtic are back in Scottish Premiership action as they host fifth-placed Ross County at Celtic Park on Saturday.

Neil Lennon’s Hoops suffered a 2-0 loss at the hands of Livingston away from home in the Scottish Premiership before the international break. That saw them lose top spot in the Premiership table to Rangers, who enjoyed a roaring win over Hamilton then.

So Lennon will expect a reaction from his boys against Ross County, who are without a win in their last two games.

Ryan Christie will start his three-game ban on Saturday after he was shown a straight red card in the 2-0 defeat to Livingston.

Jozo Simunovic is out for the entirety of this year following a knee operation, while Mikey Johnston and Leigh Griffiths are struggling to return to full fitness after a number of niggling injuries.

Forster is now the first-choice keeper in this team. He should start on Saturday.

Moritz Bauer and Hatem Abd Elhamed have been used at right-back by Lennon but it could be the former who could get a start at the weekend.

Jullien had the worst game in Celtic colours since signing from Toulouse in the summer. However, the giant defender will look to deliver a strong performance against Ross County.

Ajer has blown hot and cold this season. However, the Norwegian should continue partnering Jullien at the back.

Bolingoli-Mbombo is yet to cement his place at left-back. For Saturday’s game, however, he is certain to start.

The captain hasn’t been at his best in the past few games. He needs to regain his form against Ross County.

McGregor is one of the first names on Lennon’s team sheet. That should be the case this Saturday as well.

Elyounoussi has shown flashes of his potential but he needs a run of games at Celtic.

With Christie suspended, Ntcham could be recalled into the starting XI against Ross County.

With his express pace and ability to beat his marker without much fuss, Forrest can give the Ross County defenders a torrid time at Parkhead.

Edouard has been Celtic’s primary source of goals this season. The Frenchman is an undoubted starter on Saturday. 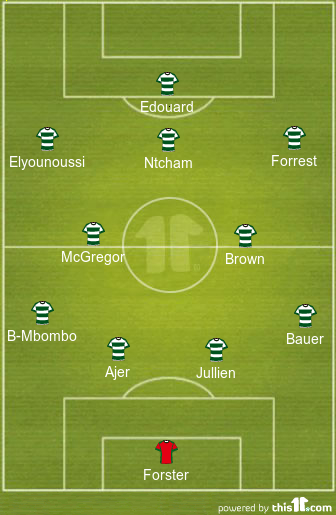