Wolves visit St. Mary’s Stadium on Saturday hoping to bounce back to winning ways against Southampton in the Premier League.

The Wanderers were dumped out of the FA Cup by Manchester United on Wednesday, with Juan Mata scoring the winner for the home side at Old Trafford. Nuno Espirito Santo’s side gave a good account of themselves but were undone in the end.

On the other hand, Southampton look re-energized, having won four out of their five games and are now seven points above the danger zone.

Wolves have no fresh injury concerns ahead of their trip to the sea coast.

The Wolves No. 1 made way for Ruddy in the FA Cup replay against Manchester United but would be back in goal when his side locks horns with Southampton.

An attacking full-back, Doherty is excellent going forward and contributes to his team’s attacks.

Despite being a defensive midfielder, the Belgian has impressed in a back-three this season. He is a regular and is certain to feature.

One of the first names on the team sheet, Coady is a real leader at the back and should lead his Wolves side once again on Saturday.

Like Dendoncker, Saiss is a defensive midfielder but he has done well in defence in the absence of the injured Boly.

Jonny is an energetic full-back who continues to thrive at left wing-back for the Wanderers.

A crucial player for Wolves in the midfield, Neves covers a lot of ground, breaks the play and helps the attack as well.

Moutinho is an experienced operator who has formed a strong partnership with Neves in the middle of the park.

Traore has proved to be a massive player for Wolves this season. Tricky, fast and unpredictable, he could cause problems to the Southampton defenders.

Neto is slowly but steadily growing into an important player for Nuno’s side. The Portuguese will retain his place in the team.

With 8 goals and 6 assists in the league this season, Jimenez has been Wolves’ primary source of goals and should continue leading their attack. 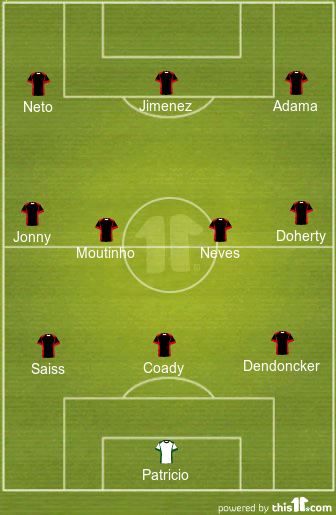