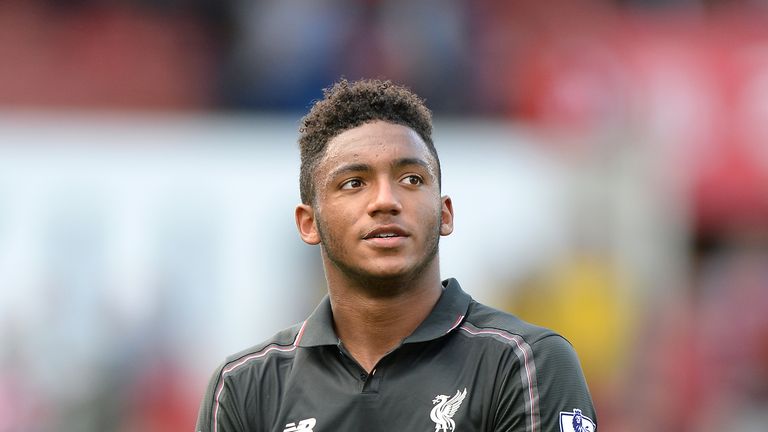 Liverpool started their F.A Cup campaign with a draw against League Two team Plymouth Argyle at the weekend, but despite the youngest ever named starting XI in Liverpool’s history failing to deliver, there was a positive to take away.

The club’s full-back Joe Gomez made a return to action after 465 days of being away, and he put in a commendable performance. The versatile 19-year-old defender suffered an anterior cruciate ligament injury in October 2015 while on duty for the England under-21 team and was only able to return to training last year October.

With the  first team and regular football definitely bound to be hard to come by for Gomez now, a temporary move away to help him speed up his development and make up for lost time would be ideal.

And while his former boss has expressed a willingness to offer just that, Klopp claims the former Charlton Athletic defender wouldn’t be leaving Anfield in the current transfer window.

Celtic manager Brendan Rodgers has shown interest in having Gomez on loan at the Scottish Premiership club for the remainder of the season, and this is a good move for all the parties involved.

Klopp hinted he chose not to sign a full-back in the summer because of Gomez as he anticipated the return of a player he holds in high esteem. In his exact words,

“If you bring a talent too early then it doesn’t help him, but with Joe for sure it’s worth kind of keeping space in the squad for.”

Placing such level of trust in a teenage defender is rare, and it shows just how much reliable Gomez can be, to the extent of being vouched for even with a long injury spell. But all that faith and belief, despite the motivational support they offer won’t do him any further good if he isn’t playing football at the highest level on a regular basis.

Only on loan at a side that wants him will that be available, and it’s why Klopp must allow his prized defender to go. Chances are he returns to Anfield by summer ready to hit the ground running and raring to go. That will likely not happen if Gomez has to start competing for playing time few weeks into full recovery.

Personally, the defender needs to work himself up to the top level he once was, and Rodgers is ready to provide that for the 2nd time having sanctioned his Liverpool arrival a few seasons ago. As Klopp has shown with Moreno and Karius this term, there is very little room for mistake in the club’s defence, and one can be sure Gomez will succumb under pressure against tricky opponents during this period of the campaign.

Hit fitness and readiness levels can’t return to the top overnight, and it’s why Celtic provides such opportunity. With 19 points ahead of 2nd placed Rangers, the Scottish giants can afford to have a Gomez who is starting to regain his form within their ranks.

Rodgers isn’t certain about the future of his centre-half Dedryck Boyata, and the likes of Kolo Toure and Efe Ambrose can be considered as surplus to requirements.

Full-backs Mikael Lustig and Emilio Izaguirre, haven’t been particularly impressive thus far, and having a player like Joe Gomez, who is able to play across the defence line would give the manager enough assurance of depth and required quality.

Gomez to Celtic is a win-win for every party involved, and as such, Liverpool must allow him to leave until summer.