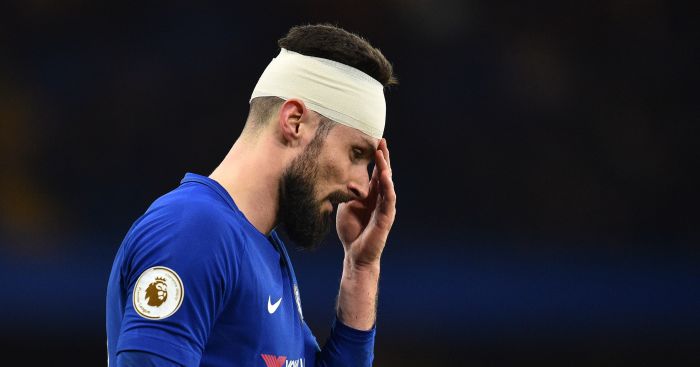 Why Signing Olivier Giroud Was The Best January Move For Chelsea

Olivier Giroud’s move to Chelsea might have broken the hearts of a lot of Arsenal fans but the player seems to have gotten off to a good start after giving his sweat, blood and tears to the club. His first start for the club was quite successful as he played a pivotal role in helping them pull off a convincing win against West Bromwich Albion after consecutive losses to the likes of Bournemouth and Watford.

However, the player had to undergo 5 stitches at the back of his head after a nasty Jonny Evans challenge. He was eventually replaced by Alvaro Morata but the Blues fans will be happy at having signed Giroud from their London rivals.

With Antonio Conte’s obvious distrust in Michy Batshuayi, the Blues were glaringly short of options up front. Despite signing Alvaro Morata last summer, Chelsea struggled in front of the goal. Whether the fans like to admit it or not, the fact is that they have failed to fill the void left behind by Diego Costa’s infamous departure and that is one of the main reasons as to why they have struggled so much this season.

Although Morata did show glimpses of encouragement throughout the season so far, it is safe to say that having only him as a recognised striker option is far from enough. And interestingly, Giroud displayed his true power for Arsenal in the first half of the season by playing the role of the perfect impact sub. To influence a game from the bench is quite a tough feat and yet Giroud made it look so easy with Arsenal.

However, it makes sense for him to play with Chelsea since there is so much more he can do for the club. The Blues have lacked a poacher for the longest time now – somebody who can just go out on any given day and create opportunities or score goals and Giroud seems like the ideal addition for that.

With pressure mounting on Conte, signing the towering Frenchman was quite a shrewd move towards ensuring the club did not sink any further than they have so far.

They were in dire need of an experienced figure to lead the line – a fact that was made all the more obvious when their front-three failed to make much of an impact against Watford and Bournemouth. This is a problem they have faced time and again but in contrast, Giroud showed them what he is capable of as they played West Brom.

Giroud may not have done much on paper and yet, his influence helped their other attackers, especially Eden Hazard, to flourish. If he continues like this, there is no limit to what he can achieve with Chelsea.