Tottenham welcome Sheffield United to the Tottenham Hotspur Stadium on Saturday hoping to bounce back to winning ways in the Premier League.

Spurs recorded their second win over Red Star Belgrade in as many weeks, beating the Serbian Champions 4-0. The win follows a 1-1 draw against Everton in their last Premier League outing and the attention will now turn back to the domestic matters for Mauricio Pochettino’s men.

Meanwhile, Sheffield United have enjoyed a successful start to life back in the Premier League so far and will pose a difficult test for Tottenham.

Jan Vertonghen has missed the last two games with a hamstring problem and is likely to be sidelined for the upcoming fixture as well. Erik Lamela could return against Sheffield United.

Meanwhile, Tottenham will be able to call upon Son Heung-min after his red card against Everton for a foul on Andres Gomes was overturned by the FA.

Gazzaniga has done well between the sticks since replacing the injured Lloris against Brighton. The Argentinean will keep his place in goal on Saturday.

Foyth started against Red Star Belgrade and performed well. That could see Pochettino hand him a start ahead of Aurier at right-back against Sheffield United.

Alderweireld has been a mainstay for Pochettino’s side and will be looking to keep the Blades’ forwards at bay at the weekend.

The Colombian has been hugely inconsistent this season, but with Vertonghen out, he’ll be eager to cement his place in the team.

Davies is likely to return back to Spurs’ starting XI after being an unused substitute against Red Star Belgrade.

Ndombele is a clever player, who’ll be aiming to set the tempo of the game from minute one.

Partnering Ndombele in the middle of the park will be Sissoko, who has been a consistent performer for Spurs so far this season.

Having bagged a brace in the Champions League victory over Red Star Belgrade, Son will be full of confidence when facing Sheffield United.

Eriksen hasn’t been at his best this season. However, his creativity will be required to unlock the Blades’ stiff backline.

Just like Eriksen, Alli hasn’t been at his best this season. Yet, the England international is likely to find himself in the team sheet on Saturday.

Kane missed the Everton game with illness but he returned to the starting XI against Red Star Belgrade. Thus, he’s likely to lead the Spurs attack against Chris Wilder’s side. 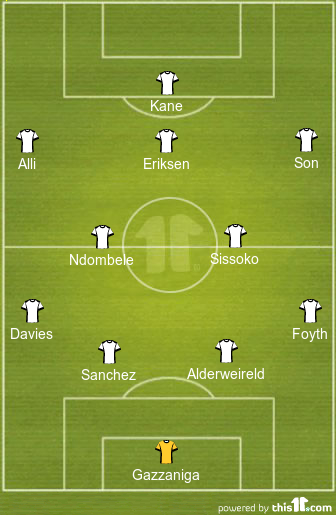