Manchester City travel to Anfield on Sunday for a showdown against Liverpool, which could prove pivotal to this season’s title race.

The Cityzens found themselves trailing Southampton at The Etihad on Saturday before second-half goals from Sergio Aguero and Kyle Walker secured a late comeback. Before the trip to Anfield, they were held to a 1-1 draw by Atalanta in the Champions League on Wednesday.

However, Pep Guardiola’s side will have to be at their sublime best if they are to beat Liverpool, who are currently leading the way in the Premier League as they are six points ahead of City and have not yet lost a game.

Oleksandr Zinchenko will be out for a month with a knee injury, while Aymeric Laporte and Leroy Sane are long-term casualties for Man City. Meanwhile, Rodri is likely to return after the international break.

With Ederson a major doubt with a muscle problem, Bravo will deputise in goal. The Chilean had replaced Ederson in the second half against Atalanta but was sent off for hauling down the onrushing Josip Ilicic. He’ll look to avoid anything near to that madness at Anfield.

With substitute Bravo sent off against Atalanta, Walker ended up between the sticks on Wednesday. However, he should be back to his usual position at right-back on Sunday.

With Laporte out injured and Otamendi unreliable, Fernandinho is expected to start in central defence for Manchester City.

Stones was an unused substitute against Atalanta in the Champions League, so he’ll be fresh to face the Reds in the Premier League.

Mendy has been really good since returning from injury. The Frenchman should start at left-back.

A classy operator of the ball, Gundogan has done well in a deeper role in Rodri’s absence and is certain to start against Liverpool.

He has by far been City’s most creative player this season and Guardiola will be expecting a big display from the Belgian against the league leaders.

Silva is a joy to watch due to his ability to retain the ball in tight areas and open up defences with his vision. He will have to be at his best to help City win at Anfield.

Following Sane’s injury, Mahrez has taken his chances with both hands and is a certainty to start on the right flank.

Sterling has been in sensational form since the start of the season and will be desperate to haunt his former employers on Sunday.

One of the best strikers in Europe, Aguero is an undoubted starter for City against Jurgen Klopp’s men. 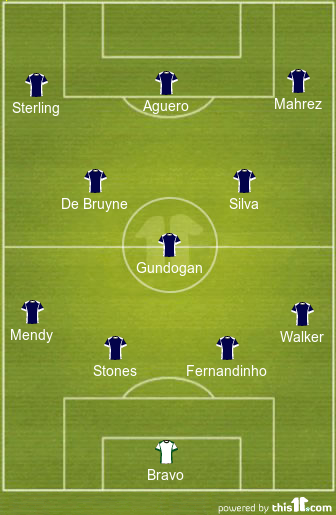