Livingston 0-0 Celtic: Hoops go top of the table despite away draw

Livingston managed to hold Celtic to a 0-0 draw but Brendan Rodgers’ men claimed the top spot in the table for the first time this season.

Celtic, fresh off their 2-1 win over RB Leipzig on Thursday night in the Europa League, made two changes for the clash at Livingston. Scott Bain and Kristoffer Ajer came in for the injured Craig Gordon and Filip Benkovic.

Brendan Rodgers’ Hoops started the game brightly and carried a threat going forward. But the major talking point of the first half came when Celtic defended a corner. Livingston forward Dolly Menga and Celtic midfielder Ryan Christie exchanged a few words and the former also attempted a headbutt.

There was no contact but the intent was clear from Menga, who surprisingly escaped a straight red card.

At the half-hour mark, it was Christie who had Celtic’s best chance but he was smartly denied by goalkeeper Liam Kelly. Five minutes later, Scott Sinclair was sent through after a neat one-two with Odsonne Edouard and yet, Kelly did well again to repel the danger. 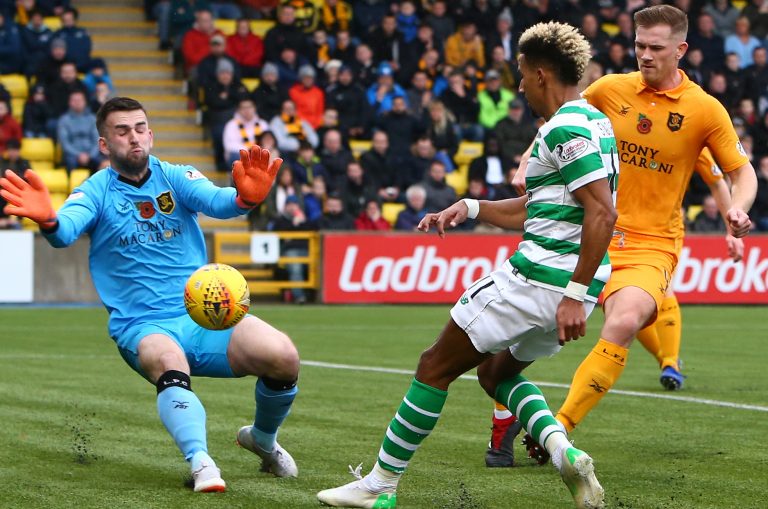 At the other end, Scott Bain was called into action a couple of times as Livingston grew more into the game as time passed by. The hosts carried a huge threat from set-pieces and Declan Gallagher’s header was smartly tipped over the bar by Bain.

From the resultant corner, Gallagher again managed to head the ball, only for Bain to keep out. Minutes before the break, James Forrest went narrowly off target with a rising shot.

After the interval, the first clear-cut chance fell to Livingston but Stevie Lawless’ effort was blocked as he looked to pull the trigger. Brendan Rodgers was forced to make a change in the 72nd minute when Ajer accidentally collided with Craig Halkett. Filip Benkovic came on as the visitors went in search of that important goal.

Livi goalkeeper Kelly continued to be resolute right until the final whistle as Celtic piled the pressure on. He spectacularly kept out a swirling effort from Tom Rogic. The game ended in 0-0 with Lewis Morgan firing waywardly over the crossbar.

Read more: 13 goals in 66 games – Celtic’s deal for influential Frenchman could turn out to be a massive coup

Here’s how some Celtic fans reacted to the 0-0 draw with Livingston.

Tough game. Livi were solid with a great keeper too.

Top of the league.

That will do for me, well done bhoys 👍

Livingstone have the second best defensive record in the league. We should be doing better but they are a good defensive side

After the Leipzig game it‘s good to take the point and go into the break at the top of the table.

We were poor by our standards today. But Livingston played their game plan perfectly. We need to find away to win in games like this. Can’t believe the Zombies let that keeper go though. He was outstanding.

Good competitive game, but how the SPFL allows such an atrocious playing surface in the top league is incredible. Truly, truly horrific.

That was murder to watch. But credit where it’s due. Livingston coped well with us.