Manchester City returned to the top of the Premier League table and inflicted significant damage on Manchester United’s hopes of even finishing in the top four, by beating them 3-1 at the Etihad Stadium.

Jose Mourinho’s side fought but Manchester City were a class above them and that margin would have been greater had they converted their opportunities.

Pep Guardiola made one change from the previous league outing, giving the nod to Riyad Mahrez ahead of Leroy Sane. Jose Mourinho, on the other hand, made four changes as Paul Pogba missed the Manchester derby with an injury.

City, as expected, dominated the proceedings and got their noses in front through David Silva, who put the finishing touch to a fantastic build up. Manchester United improved slightly after falling behind, with Anthony Martial and Jesse Lingard looking bright, but Ederson was rarely tested.

Chris Smalling went closest for United with a header which went over the bar but otherwise, City were at ease and walked into half-time with a 1-0 advantage. 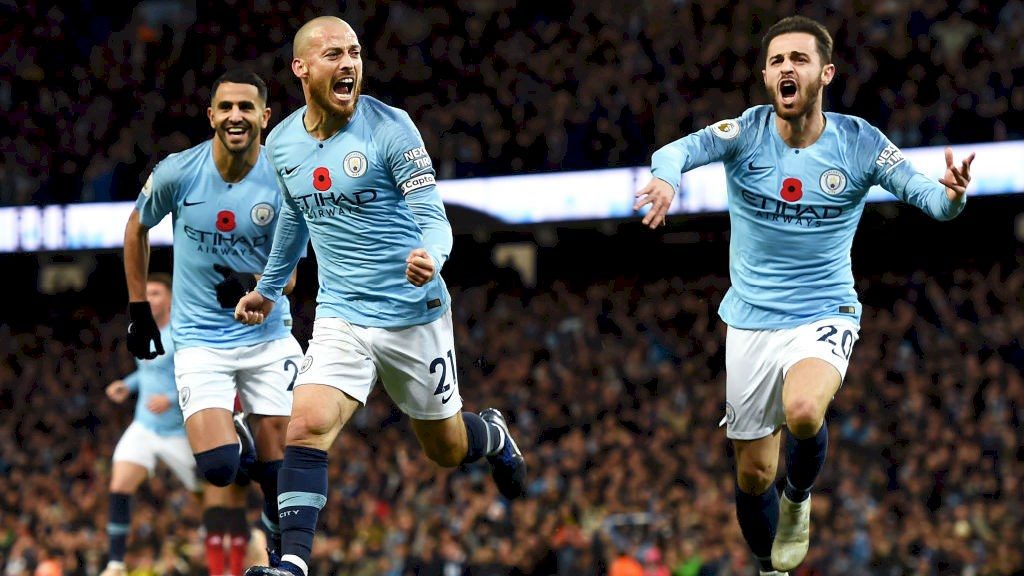 And the champions came roaring back after half-time and doubled their money. Lingard fumbled a regulation control in the middle of the park and Bernardo Silva pinged to ball to Aguero, who played a quick one-two with Mahrez on the edge of the box before lashing a powerful effort past David De Gea.

Mourinho responded by throwing Romelu Lukaku on from the bench and the Belgian made an immediate impact, getting fouled inside the box by Ederson. Martial calmly slotted the penalty and halved the deficit just before the hour mark.

However, the Red Devils couldn’t make their goal count as the Cityzensquickly regrouped and started creating chances again. With 20 minutes left, Mourinho made a double substitution, removing Ander Herrera and Marcus Rashford for Alexis Sanchez and Juan Mata. Guardiola responded by bringing on Ilkay Gundogan for Sergio Aguero.

Substitute Leroy Sane wasted a good opportunity as City broke with three against two only for the winger to fire over the bar. But another substitute, Gundogan sealed the win and the bragging rights by netting from Bernardo Silva’s cross in the 86th minute.

Read more: Why time could be right for Man United to offload English star who has never played more than 29 league games in a season

Hugely disappointed with the 3-1 defeat at the hands of neighbours Manchester City, here’s how some Manchester United fans reacted.

It seems like a lot of them have given up on playing for the club while some are simply not good enough for United.

Indeed! Tbh Mourinho’s style of play should be upgraded, that’s a fact,

They are genuinely miles and miles better than us, if nothing massive changes we’ll never get close to a league title again

Insanity is when you’re 2-1 Down and chasing the game and all your players are busy passing backward, not putting the pressure on the opponent and your manager is standing with his hands in his pockets hoping for the same miracle that happened in Turin against Juventus. Shambolic

There was a real gulf in class between the two teams. I can’t believe that’s the ManUtd I used to know.