Manchester City got their name into the record books after securing the treble with a fine 6-0 victory against Watford in the final of the FA Cup. Goals from David Silva, Kevin de Bruyne, Gabriel Jesus and a hattrick from Raheem Sterling gave them the trophy at Wembley.

Despite having much of the possession in the first five minutes of the game, Manchester City could not create anything meaningful, thanks to Watford’s relentless pressing.

Watford’s early pressure paid off as Gerard Deulofeu was released on the right wing who cut the ball to Roberto Pereyra. The Argentine had just Ederson to beat but he failed to do so. Huge let off for the champions.

The Hornets had a huge shout for a penalty denied as Doucoure’s shot looked to have come off Kompany’s arm inside the box. The Frenchman went into the book for protests after the call which wasn’t reviewed by VAR.

City’s first big chance of the game gave them the lead as Raheem Sterling headed the ball into the path of David Silva who spun away from Femenia before slotting the ball in the back of the net.

The goal completely shifted the game in City’s favour, who found more joy in penetrating the Hornets midfield. Gabriel Jesus received the ball inside the box but his attempted shot was blocked brilliantly by Mariappa, who saved an almost certain goal.

City doubled their lead in the 38th minute after Bernardo Silva floated a delicious ball beyond the far post which Jesus directed goalwards. The Brazilian’s ball had rolled in but Sterling took no chances and doubled their advantage before half-time.

Riyad Mahrez had a go after some brilliant skill on the ball but Gomes was up for it this time around. City deservedly went into the break with a two-goal lead and with a foot in the history books.

The Hornets started off the second half very well and saw a lot of the ball in City’s half. Roberto Pereyra had a chance to make amends for his earlier miss but he passed the ball instead of shooting, which made it easy for City to clear.

City’s first chance of the half came through Jesus, who skipped past Mariappa before having a pop at goal but it was saved well by Gomes. Jesus found the net almost immediately after heading home a cross from Zinchenko but the flag went up for offside.

Watford continued to press high and it almost paid off as Deulofeu skipped past Zinchenko and Gundogan before laying the ball off to Pereyra but his return pass was behind the Spaniard and the chance was wasted.

Pep Guardiola addressed the issue of his side being overrun in the midfield by bringing on Kevin de Bruyne in place of Riyad Mahrez, who had a very impressive game to that point.

Deulofeu had another chance to find the net after Capoue headed the ball into his path but he scuffed his left-footed shot wide. David Silva went into the book for a foul on Hughes in the middle of the park.

City extended their lead after Jesus drove with the ball into the final third before crossing it to De Bruyne, who calmly slotted the ball in. Brilliant composure there from the substitute.

Javi Gracia made his first changes as Deulofeu and Pereyra were replaced by Gray and Success. The change failed to change anything as City scored their fourth just two minutes later.

Kevin de Bruyne returned the favour to Jesus, who similarly like the Belgian passed the ball into the back of the net. Watford looked down and out at this point but the champions looked hungry for more.

De Bruyne had another chance from inside the box but he left-footed curler went high and wide. Leroy Sane and John Stones came on for Ilkay Gundogan and David Silva for the final quarter of the game.

Bernardo Silva drove into the box before fizzing a cross across the box, which was buried in by Sterling to give City their fifth of the game. The former Liverpool winger scored another goal just six minutes later after slamming home a rebound of his own shot. 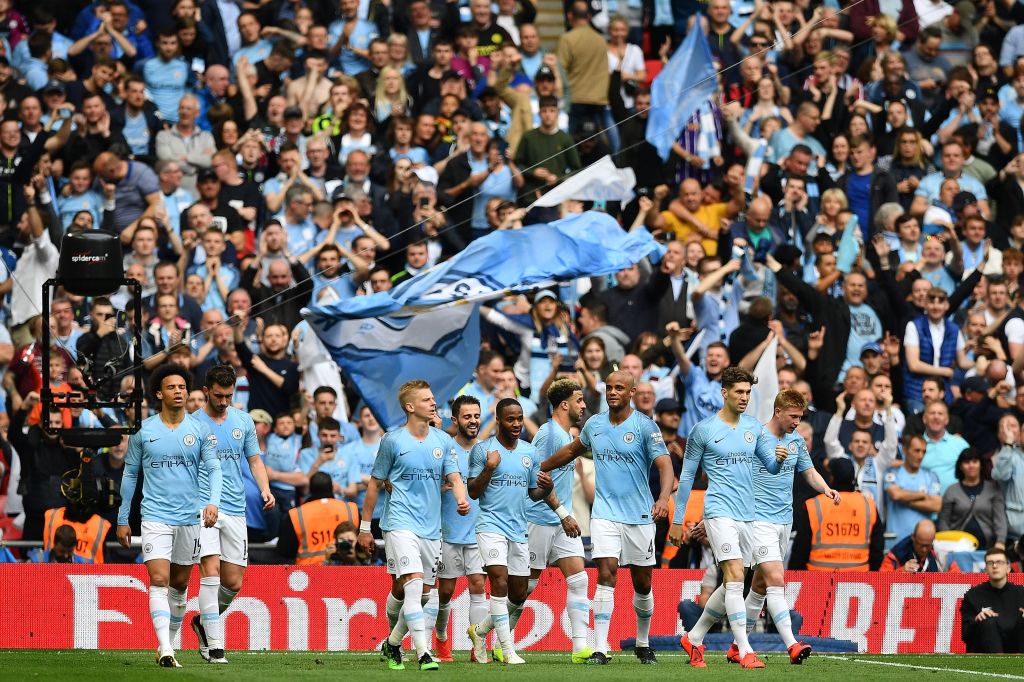 Watford couldn’t wait to hear the final whistle and so it came after two minutes of added time. City were deserved winners of the FA Cup as well as the treble after a historic season.

Here’s how some fans reacted to the brilliant result: