Rangers return to Scottish Premiership action on Sunday with a visit to relegation-threatened St Johnstone.

The Gers started their Europa League campaign on a positive note in the midweek with a 1-0 victory over Dutch club Feyenoord. Now, Steven Gerrard will be hoping for a victory on Sunday as they try to keep apace with Celtic at the top of the table.

On the other hand, St. Johnstone are without a win in the Scottish Premiership this season. So, they’ll be looking to cause an upset at home against Rangers.

Ryan Kent missed the Feyenoord game with a hamstring injury and could be back fit for the start of October.

Jon Flanagan had a hernia surgery during the international break and is set to be sidelined for a while now. Jordan Jones is ruled out with a knee injury but Jamie Murphy, who damaged his ACL in a League Cup win over Kilmarnock 13 months ago, could come back into contention sooner than expected.

McGregor is Rangers’ first-choice goalkeeper and should be in goal on Sunday.

Tavernier missed a spot-kick in the 1-1 draw with Feyenoord on Thursday. He’ll be raring to redeem himself with a big performance on Sunday.

Goldson has been a reliable presence at the back this season. He is probably one of the first names on the team-sheet.

Gerrard threw Helander in the big game against Feyenoord and he didn’t disappoint. He could be handed another start at the weekend.

With Flanagan injured and Barisic having played against Feyenoord, Gerrard could with Halliday at left-back for the upcoming game.

Davis is an experienced performer who could start in a deeper role at St. Johnstone and dictate the tempo of play with his passing range.

Kamara can move the ball quickly in midfield as well as break the opposition’s play. An energetic presence, he could again be picked ahead of Joe Aribo in central midfield.

Jack is a very important player for the Gers due to the qualities he brings on the table. He’ll retain his place in the team for Sunday’s clash with St. Johnstone.

Arfield is a creative player in this team who should start on the right flank at St. Johnstone on Sunday.

Ojo scored a brilliant goal against Feyenoord on Thursday and will be raring to get himself on the score-sheet at the weekend as well.

Morelos is Rangers’ chief source for goals. The stocky Colombian will look to help his team win all three points at McDiarmid Park. 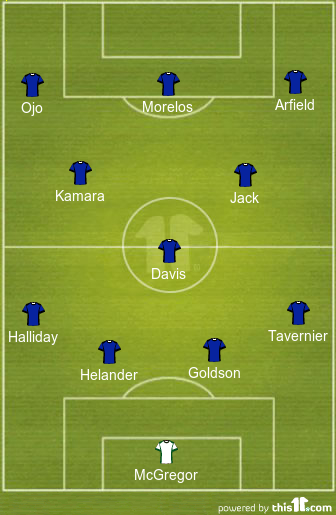