League leaders Celtic welcome Kilmarnock at Celtic Park on Sunday as they look to continue their unbeaten run in the Scottish Premiership.

The Hoops have enjoyed a 100% start to the new campaign, winning their first five games. They hold a three-point advantage over Old Firm rivals Rangers and come into Sunday’s contest off the back of a hard-fought 1-1 draw with Rennes in the Europa League.

Jozo Simunovic, Nir Bitton, Luca Connell, Mikey, Johnston, and Marian Shved all missed the trip to Rennes and could be out for Sunday’s game as well.

Boli Bolingoli-Mbombo was forced off with injury against Rennes and remains a touch-and-go for the upcoming fixture.

Forster is the team’s number one goalkeeper as of now. He should be in goal for Sunday’s game.

Elhamed has done well for his new club so far and will be looking to continue in the same vein.

A leader at the back, Jullien is quickly becoming an indispensable figure for the Hoops.

Ajer gave away a needless penalty against Rennes on Thursday. He’ll be looking to redeem himself with a big performance on Sunday.

With Bolingoli-Mbombo getting injured in midweek, Lennon wouldn’t take any risk with him and should go with Hayes at left-back.

Brown is a real leader on and off the pitch for Celtic. He is an undoubted starter for Sunday’s game.

McGregor has been a crucial player for the Hoops since the past couple of seasons. He is likely to start in central midfield alongside Brown.

Blessed with pace and power, Forrest can win games singlehandedly on his day. He will keep his place on the right-wing.

Christie scored the all-important penalty in the 1-1 draw with Rennes. He should keep his place in the team for this weekend’s game.

Elyounoussi is a tricky customer who gives flair and creativity to the Celtic attack. He’ll look to help his team maintain their 100% start to the new season.

With three goals in the Scottish Premiership this season, Edouard has virtually cemented his place in the no.9 role. The Frenchman will lead Celtic’s attack against Killie. 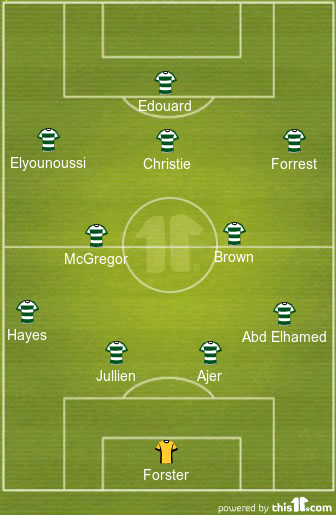