In their last outing, Watford showed real desire and grit to overcome a Leicester City side who were recently gutted by the sacking of former manager Claude Puel. Despite Brendan Rodgers’ appointment as the Foxes boss, the Hornets were able to trump them 2-1.

They will face, what could possibly be their toughest test until the end of the season, as they are set to travel to the Etihad Stadium to face table-toppers Manchester City in a bid to upset the could-be champions.

Kiko Femenia is Watford’s only real injury concern for this fixture as most of the team seems fit enough to remain in contention. The Spaniard is suffering from illness and could be a doubt for the fixture at the weekend.

The former Manchester United man has saved more than one match for the Hornets this season and has nailed down the starting role.

Kiko Femenia’s illness could come as a glimmer of hope for the Dutchman to keep his place in the starting line-up.

The Jamaican international has been a key player, especially in the absence of Sebastian Prodl due to injury.

The leader of the pack, Cathcart has been a crucial member of the first-team picture and has even pitched in with a few goals.

The Greek defender has been in fine form all season and despite his ripe age, his performances haven’t dipped in quality.

The highly-rated Frenchman has been excellent in the defensive phase and is a key member of this Watford core.

His understanding of his teammates is one of his biggest assets as he just seems to have a sixth sense about their runs.

Having been moved over to the other side in Roberto Pereyra’s absence, he should take his place back on the right-hand side.

The most creative player on the pitch for Watford by a massive distance, his injury has hit them hard and he will be looking to bounce back.

His partnership with Troy Deeney seems to be improving every game and he’s even managed to keep Andre Gray out of the team.

Deeney’s goals have come at key time for Watford this season and the talisman is a sure starter for the Hornets. 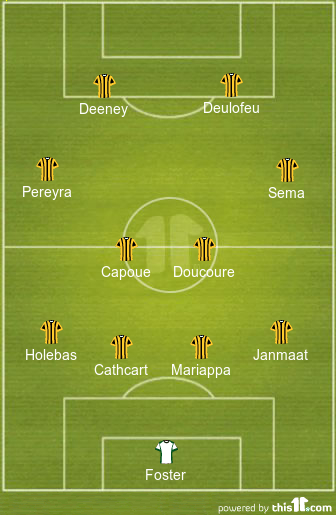